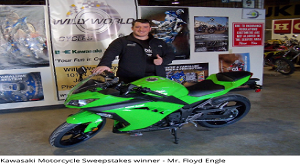 Kawasaki Robotics recently exhibited at PACK EXPO in Chicago, Illinois, and FABTECH in Atlanta, Georgia, both of which attracted thousands of attendees looking for manufacturing automation solutions and the latest trends in robotic technology. Kawasaki Robotics saw hundreds of visitors at both trade shows every day who were interested in seeing state-of-the-art technolology for a variety of applications. In addition to showcasing the latest in robotic automation technology, Kawasaki Robotics ran a sweepstakes with a brand new 2015 Kawasaki Ninja 300 ABS motorcycle as the prize.

The sleek-looking bike turned heads and attracted thousands of ballot entries from attendees who were very eager to win it. Numerous visitors were seen posing next to the racy motorcycle as a friend took a photo, while others slipped through the crowd and took a quick “selfieâ€ with the bike behind them. Ballots could be entered during both shows, from open to close each show date. At the end of the FABTECH show, the ballot entries were mixed thoroughly and the winner was drawn.