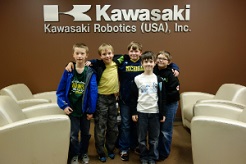 Kawasaki Robotics hosted Howell’s only elementary students FIRST LEGO League team, the Mustache Monsters, on the evening of November 7, 2014. The Mustache Monsters compete in various LEGO-built robot competitions all over the Southeastern Michigan region. In these competitions, the team is given a challenge, such as programming the robot to throw a ball through a hoop, and they must plan the build of the robot and program it accordingly so that it achieves the given objective, earning the team points. All FLL teams are provided with standard materials and technology from the LEGO company to design, build, test and program their robot, along with additional LEGO pieces to customize it for specific challenges.

The Mustache Monsters were delighted to get a tour of the Kawasaki facility, led by Kawasaki's own Greg Tormanen, who is also the coach for the team. The team of nine year olds was given the opportunity to expand their knowledge with a programming lesson on a real live robot while learning and following the safety protocol in a real robotic lab setting. At the end of the programming lesson and tour, they gathered together for a question and answer session followed by prizes and treats. The Howell Mustache Monsters had a great time and Kawasaki was pleased to host a group of such bright, young minds!