In the mid 1980s, the number of robots in operation in Japan surpassed 93,000 units,
a figure almost equivalent to 70% of all robots in the world, and the country would become a “Robot Kingdom”.*
Since signing the technical license agreement with Unimation in 1968, Kawasaki, whose robots played an assisting role during this economic growth spurt, went on to steadily accumulate know-how and experience.
And to further its business expansion, Kawasaki had its sights set on the markets of the United States, where the gigantic automotive industry was flourishing, and Europe.

In 1986, Kawasaki established its first overseas base, the North American branch, in “Motor City” Detroit to develop business with American car manufacturers. Kawasaki’s competence in applying its technology and experience in establishing production lines in car manufacturing plants also gave the company a chance to interact with America’s Big Three car manufacturers the same year, making presentations, visiting their factories and opening up new business opportunities.

In order to deliver robots to American car manufacturers, manufacturers were required to clear each and every meticulously-detailed item set out in an independent performance evaluation test, a test thought to be “the strictest in the world”. In fact, this test was so tough that it was used as a reference point during the establishing of international standards later on. In order to pass this test, Kawasaki sent dedicated engineers from Japan to the United States from the beginning of 1986. They persevered in their efforts to satisfy the strict requirements and eventually passed the test. The performance of Kawasaki robots was certified. In October 1987, the functions of the Detroit branch opened in 1986 were expanded and the "Detroit Robot Center" was established.

After passing the performance evaluation test, Kawasaki robots were introduced into actual production lines of an American manufacturer as a trial and factory workers continuously received education and training on how to operate the machines. It took nearly one year until the manufacturer finalized their decision to purchase Kawasaki robots, after going through and successfully passing several rounds of evaluation tests conducted with different models. At the time, US-made robots ran into several initial problems after installation and took time before becoming operational, but with Kawasaki robots, there were no discrepancies between the results of the actual operation and the prior test results, adding to the praise from American car manufacturers. Following the initial installation of a few units in 1988, a few hundred units of spot-welding robots were introduced in 1989. In 1990, as a result of this large-scale adoption, the Detroit Robot Center evolved into the present Kawasaki Robotics (USA), Inc. (KRI).

A Full-Scale Entry into the European Market

In the early 1990s, Kawasaki headed to Europe in search of a new market. In 1989, overseas representatives were dispatched to Amsterdam in the Netherlands where the Kawasaki European office was located. In 1991, a local office within Kawasaki Motors UK (KMUK) in London, England was established. In addition to grasping a clue for entry into the European automobile industry, Kawasaki looked into building a business foothold in the European market with an expectation of introducing robots in other industries. Soon after, in November 1995, the local subsidiary Kawasaki Robotics GmbH (KRG) was established in Germany. And in 1996, the Robotics Department in the London office would become independent, leading to the establishment of Kawasaki Robotics (UK), Ltd (KRUK). Kawasaki was reinforcing its European service and sales network. 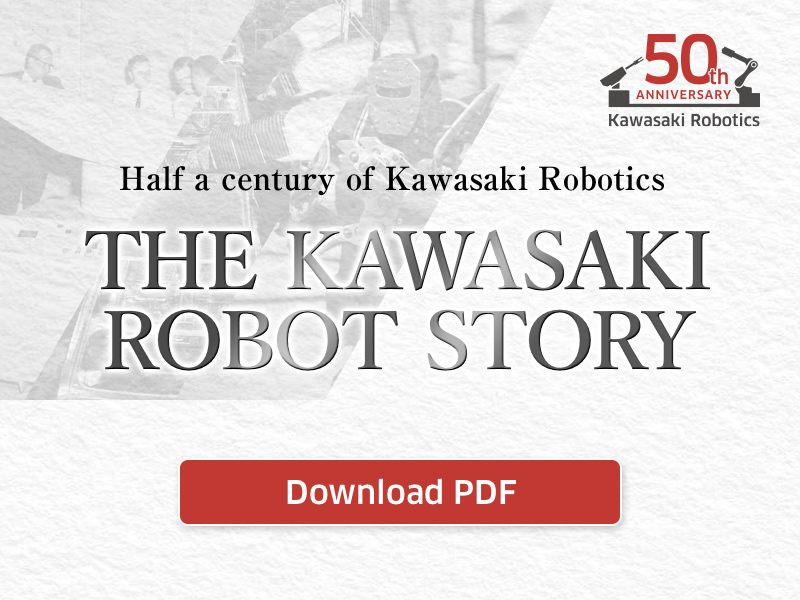