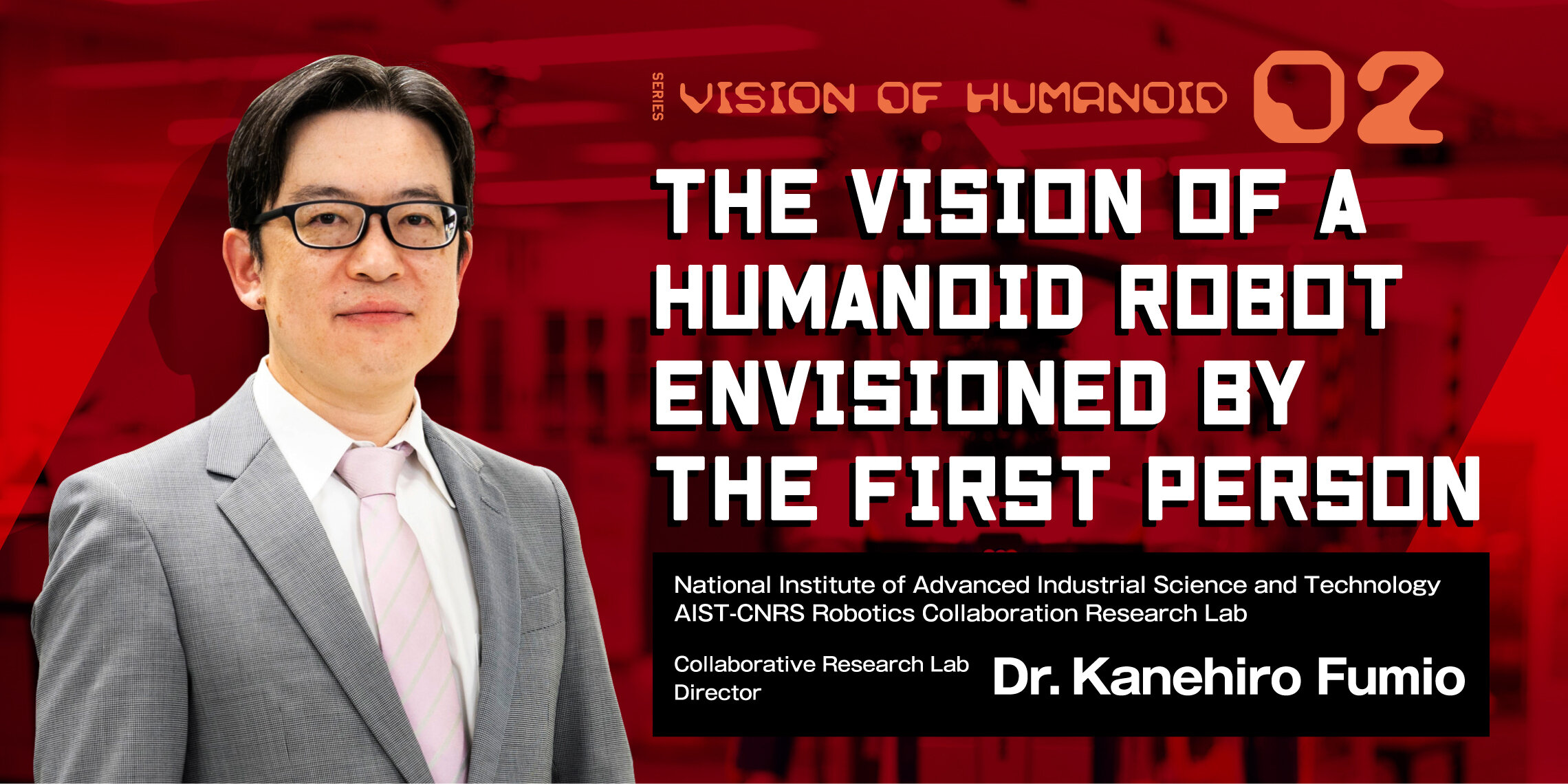 From the Lab to Reality: Developing Humanoid Robots for Real-Life Tasks

Humanoid robots are the main research theme of the French National Centre for Scientific Research and the National Institute of Advanced Industrial Science and Technology. For more than 20 years, the lab has been developing the Humanoid Robotics Platform series of humanoid robots.

The National Institute of Advanced Industrial Science and Technology, or AIST, is one of the largest public research institutes in Japan and employs roughly 10,000 specialists. Their wide range of research covers topics like next-generation automobiles, renewable energy, biomedical science, geology, and nanomaterials. They also have a state-of-the-art humanoid robotics lab in conjunction with the French National Centre for Scientific Research (CNRS), called the AIST-CNRS Robotics Collaboration Laboratory (JRL).

Current AIST-CNRS Robotics Collaboration Laboratory (JRL) Director Dr. Kanehiro Fumio joined AIST in 2000, around the time when Honda Motor Co. unveiled its humanoid biped walking robot, ASIMO. "Now there are many competitors in the humanoid robot industry, but at that time, Honda was the only one,” Fumio said. “Accordingly, AIST decided to develop the Humanoid Robotics Platform series (HRP) starting with the HRP -1, developed by Honda."

Fumio was first given the task of creating an operating system for the HRP so that robots could have operation planning functionality and control technology. Like humans, autonomous robots can't move without a brain as well as a body. AIST used body hardware based on Honda’s P3 model (ASIMO’s predecessor), but the HRP-1 software was proprietary to Honda and could not be used. Therefore, Fumio first created the software that moves the body of HRP-1. Once the software was made, he and his team constructed the hardware from scratch. This is how the humanoid robot development process began at JRL.

Getting Input from Valuable Sources

"In order for many humanoid robots to be produced and sold in large quantities, they must provide value for that amount of money. Even if a robot specializing in disaster response is developed, there is no place for it without major disasters,” Fumio said. “Then, the social implementation of humanoid robots will not proceed. This is why robots working at construction sites or factories in normal times rush to the site to rescue workers. We need to develop a robot that has that kind of versatility."

According to Fumio, getting the input of a person who will work closely with the robot is an important part of getting the robot field-ready. What kind of work do they want the robot to do? What needs are there? It's vital to understand their answers to those questions.
To demonstrate this point, Fumio recalls a system the lab designed that used a robot to lift a plaster board and install it on a wall. This allowed the robot to work during the whole process, up to the point of fixing the plaster board with screws. When he showed the system to the workers, they were able to provide valuable input to optimize the design.
“This is very helpful in terms of technical hurdles when considering social implementation,” Fumio said. “In the past, technical hurdles had been raised to realize all tasks with robots, but the important thing was that people and robots understood each other's strengths and weaknesses, and that researchers did not decide the roles of robots, but rather confirmed the roles of robots based on the voices of the field. By doing so, I think the practical application of robots will be accelerated."

The Social Implementation of Humanoid Robots

Staff working in Fumio’s lab are highly motivated to create a human-like system to take on work that only humanoid robots can do. They continue to develop products while imagining how they would work in the field.

"Humanoid robots would be ideal for a site where very big things such as airplanes, ships, buildings and houses are made. In fact, when you go to a place like this, there's very little automation like there is in a car factory. It's impossible to build a system where robots assemble cars around a moving conveyer belt in an airplane or ship factory."

During automobile production, industrial robots assemble windows and doors on flowing belts and weld car bodies supported by jigs, but they actually do not have a large range of motion. Building an airplane or ship requires robots to accomplish a number of different tasks using various tools.
Because automotive industrial robots perform tasks like assembling windows and doors on a conveyor belt and welding car bodies supported by a jig, their working range does not need to be large. However, when it comes to making airplanes and ships, it is necessary for robots to walk around the large-scale products during assembly, climb steps, and perform a number of different tasks while navigating the work site. They also have to be on able to avoid obstables, such as materials and tools scattered on the floor.

"There are two approaches to automating these sites. One approach is to allow a humanoid robot to do exactly what a human is doing. The other is to radically change how airplanes, houses, and themselves are made from the perspective of automation,” Fumio explains. “For example, in the case of a house, the construction method is completely changed, such as making most of the parts in the factory and only loading them at the site. But neither is so easy. We need to mix and match both approaches."

Another task that Fumio and his colleagues think humanoid robots can tackle is that of a sort of tester. For example, think about performance testing for a wearable robotic exoskeleton. Currently, it is difficult to collect quantitative data due to the human subject’s feelings, fatigue and sensitivity. But with robots, it is possible to make objective measurements even after repeating the same action 100 times. Fumio also said they could use an actively moving dummy robot for car crash tests, which could provide better measurements than tests using static dummies.

From the Laboratory to the Workplace

The American company Boston Dynamics is almost always mentioned in conversations surrounding humanoid robots. "They're definitely on the cutting edge in terms of athletic ability," Fumio says, but continues.

"What we're trying to do is assemble a large structure that can fly and jump, but it doesn't have to. Rather than moving fast and dynamically in an open space, precise work is required in a narrow and intricate space, and speed is not required so much. We're going in a completely different direction."

The HRP-5P robot carries the board and fastens it with screws.

The JRL is looking to produce an an artisan robot that does steady work. Fumio explained that in order to implement such robots in society, it would be beneficial for Kawasaki to develop humanoid robots like Kaleido.

"The robot we made is an article for research. It's just for use in the lab. However, when it comes time to put it out to the world, it is necessary to have the reliability and durability required by the actual field,” Fumio explained. “Since Kawasaki has such experience, we believe they will be able to create a robot that can really be used in the field. And it's fast. When I first looked at Kaleido in 2017, it was plugged into a power cord and had an external controller. But last year 2019, Kawasaki showed a more independent second version…with little change in proportion. It's amazing."

For example, as the Model T paved the way for the cars we know today, Kawasaki's expertise in the manufacture and scale of industrial robots will help speed up the implementation of humanoid robots. So will a world like Doraemon or Astro Boy be around the corner when humanoid robots are commercialized?

"It is difficult to see a humanoid robot in a family like in comics and cartoons. I think it's a long way off for humanoid robots to coexist in homes with babies and pets, different furniture locations and messy toys,” Fumio said. “But basically, there are only adults with certain skills at the production site. What we are thinking of now is a humanoid robot that works in a world that is separated from such daily life, and if something happens, goes to a disaster site."

Fumio’s specific research field is operation planning. He researches how to program skillful human-like actions such as bending fingers to grasp a tool or lifting an object from a table. For humans, simple motions like those can be maneuvered dexterously with efficient trajectories while unconsciously avoiding obstacles. It is not as easy for robots. Fumio studies how many times each joint bends for this type of movement, and how to get the computer to translate the movement to the robot. In the case of the humanoid robotics, it is necessary for the center of gravity to prevent it from falling down, which makes the situation even more complicated. Despite these complexities, The JRL team is fascinated by humanoid robots and continue to develop them today.

"At the root of making humanoid robots is the desire to understand what is going on with humans. Maybe it's not logical," Fumio says.

After studying humanoid robots for 20 years, Fumio is ready for the next step. "I feel like the time has come to send my child out into the world," he said with a soft smile.