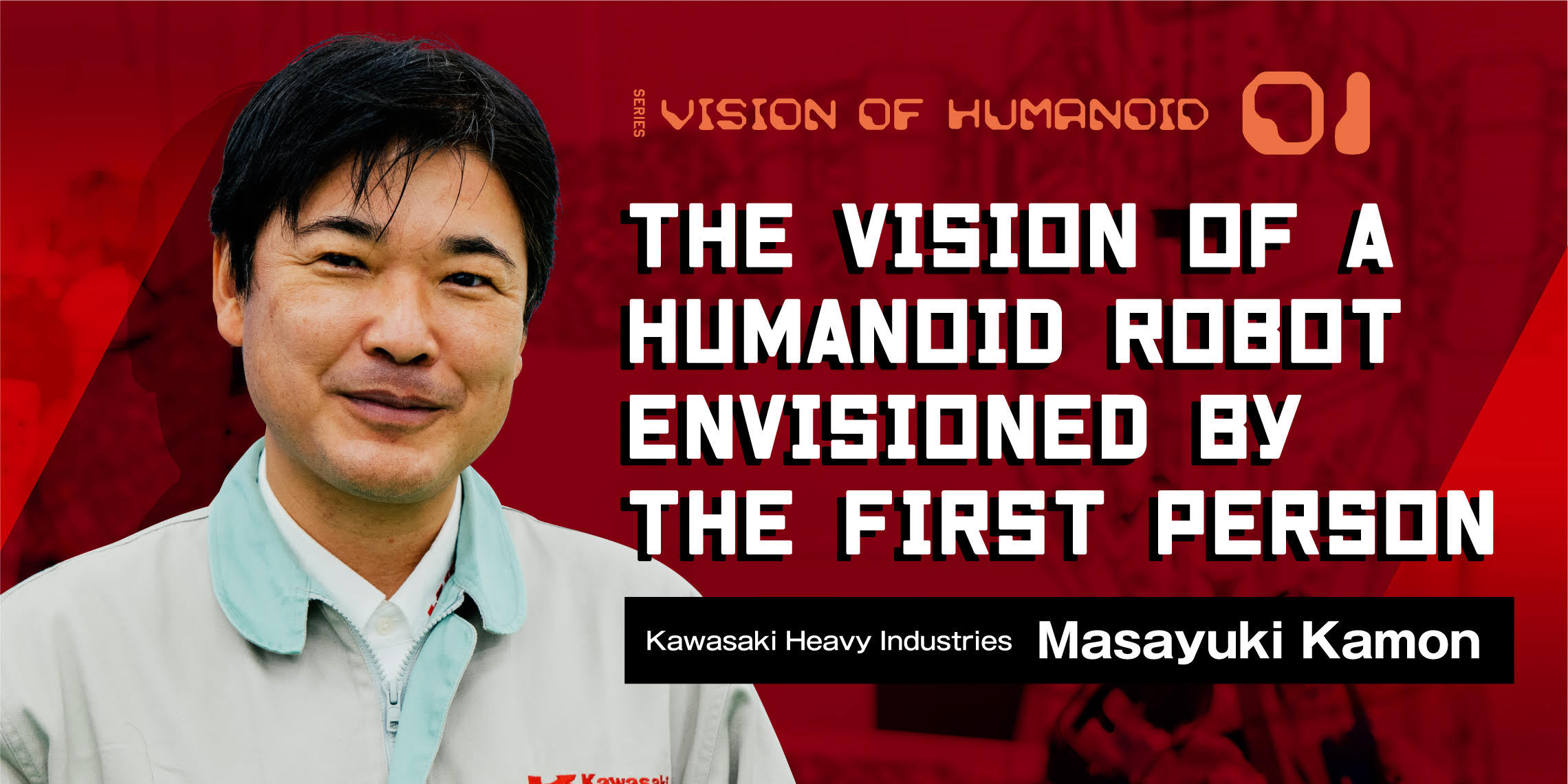 The concept of humanoid robots living alongside humans has become a popular one in the world of animation, movies and novels, which has led many people to imagine it becoming a reality. Kawasaki Heavy Industries, Ltd. (KHI) is taking on the challenge of building humanoid robots for the real world. KHI has a history of more than half a century in the field of industrial robots, so why did they decide to start building humanoid robots? I asked two key players at KHI to find out the reason.

In 2014, Yasuhiko Hashimoto, the former head of the Robot Business Center and current President of Kawasaki Heavy Industries told Kamon that he wanted to begin developing a humanoid robot. At the time, Kamon belonged to the company's Technology Development Division. "I wondered why a humanoid robot? Even industrial robots were not as familiar to people as they are now," Kamon said.

But, much to his surprise, Kamon was excited. Robots and machines have been his favorite objects since his childhood, and the dream of a boy who wanted to be involved in manufacturing of the future was becoming a reality.

"The president said, 'This time, give your children a dream.'" Kamon says with a smile.

The concept behind the development of Kaleido is a durable biped humanoid robot that won't break even if it falls. "Because Kaleido is made by a long-established industrial robot manufacturer, our aim is for it to be able to work 24 hours a day, 365 days a year," Kamon said. To use the automotive industry as a metaphor, it is not a concept car that is in the spotlight on the stage of a motor show, but a mass-produced car that supports everyday life. The "doesn't break even if it collapses" proposition was meant to apply to a working product. In order to accomplish this goal, durability, reliability and cost competitiveness cannot be neglected.

Kaleido is about 180 cm tall and weighs about 85 kg, making it similar in size to a human adult. This is beneficial in the case of disaster relief and nursing care, for example. Buildings and equipment are constructed for use by human bodies, so simple actions like opening a door or pressing a button are more easily done by a humanoid with the same body size as a human. Kaleido's ability to lift and suspend a 60 kg weight will also give it the strength it needs to save a person. In the future, Kaleido will even be able to work in the same work clothes as its human counterparts.

While the implementation of service robots for hospitality roles such as receptionists, food service and guidance is accelerating in society, the role given to Kaleido is to work 24 hours a day, 365 days a year, with equal or better accuracy than that of a person and it should not be focused on entertainment or communication. Like a car that can be used for 100,000 km with peace of mind, KHI will support maintenance and supply parts after operation, with a focus on maintainability. Kawasaki is the only company in Japan that has developed humanoid robots based on this philosophy.

Kamon's words, "our job is to produce robot bodies" have a heavy industry perspective. "Kaleido will never go out on its own. I think we're going to bring a lot of wisdom together into the world," says Kamon. His team trains the hardware aspects of Kaleido's robot body every day. In the future, they are hoping AI makers will want to use their technology with Kaleido, which will only enhance the human-humanoid relationship.

Another key word unique to Kawasaki is "hydraulic pressure." Shimamura says, "Kawasaki is a leading manufacturer of hydraulic equipment. If the history of industrial robots is 50 years, hydraulic systems have a history of more than 100 years." KHI has been pursuing hydraulic technology for more than a century, providing a wide range of products on land, sea and air. Especially in the world of hydraulic excavators, it has the largest share in the world.

Hydraulic equipment is an unsung hero in society, as Shimamura puts it. "Hydraulic equipment is used at steelworks and various plants to operate equipment that requires a great deal of power. Kawasaki originally introduced the technology from England in 1916 and made hydraulic steering gear for ships in Kobe. In 1969, we announced the 'Kawasaki Unimate,' Japan's first industrial robot, which was also a hydraulically driven robot, not an electric one."

Kaleido's joints are currently powered by electric motors, but it's possible that they will eventually be powered by hydraulic motors. In fact, KHI has tried to install a hydraulic actuator in the fourth generation.

"A hydraulic cylinder can produce more force than an electric motor and can withstand a strong impact. In the future, as hydraulic actuators evolve and become large enough to be mounted on humanoid robots, we are considering the use of hydraulic cylinders," Kamon said.

The hydraulic pressure, which can be said to be the origin of Kawasaki Heavy Industries, is directly connected to the development of the most advanced humanoid robot. The accumulated history of robotic and hydraulic technology has resulted in advanced technologies and provide new value in society. This must be the reason why Kawasaki has begun devloping humanoid robots.

The original Kaleido was completed in 2016. Since then, Kaleido has evolved to the seventh generation. In the second generation, the current joint structure was roughly decided, and in the third and fourth generation the focus was on weight reduction and reliability. In the fifth and sixth generations, Kaleido was given a built-in battery and controller, allowing the robot to run independently.

Currently, Kamon’s team is working on two objectives for Kaleido. First, autonomous walking at a normal walking speed. "The hardest thing I've done so far is to walk. We've cleared one kilometer per hour, but we haven't reached four kilometers per hour yet. Walking is important," Kamon said.

Kamon also showed me a video to demonstrate Kaleido’s next objective. In the video, Kaleido jumps from a staircase and lands safely on the ground. "We are working on balance with ‘HYOI’ by going down the stairs with one foot. It's actually very difficult for a robot to reproduce this natural movement that even a child can do. But as a humanoid robot from an industrial robot manufacturer, Kaleido aims to bring practicality to people's lives,” Kamon said. “That is why we are going beyond ‘HYOI’ to a level where the robot itself can jump." Accomplishing ‘HYOI,’ or smooth and coordinated leg movement, is something the team is hoping to complete in fiscal year 2021.

Why Kawasaki Created a Humanoid Robot

So, why did Kawasaki decide to build a humanoid robot? The reason for this can be found in what Hashimoto said to Kamon six years ago. "One reason is to show the world the new possibilities of robots. Another is synergy. We are one of the world's leading manufacturers of industrial robots. But, in order to take a step beyond that, we thought we needed to work on developing robots with completely different ideas," Kamon said.

If the technology created in the development of humanoid robots is fed back to the manufacturing of industrial robots, there will be synergy between them. The aim of what we saw six years ago is now a reality. For example, the miniaturization technology developed by Kaleido is already being used in Kawasaki's next generation of product development.

So when will Kaleido be ready for production? "I want to put Kaleido into practical use while I'm at work,” Kamon said. “Well, there's a humanoid robot somewhere in society doing something. And I think that's going to happen in 2030."

Finally, let's see what the future holds for Kaleido 10 years from now.

"By the time Reiwa's children support Japan, it will be like a smartphone. This smartphone we are using now is not all-purpose, but it is very convenient if it is on the side. Humanoid robots could be like that," Kamon said.

How does Kaleido fit into our lives? I can't wait to find out.