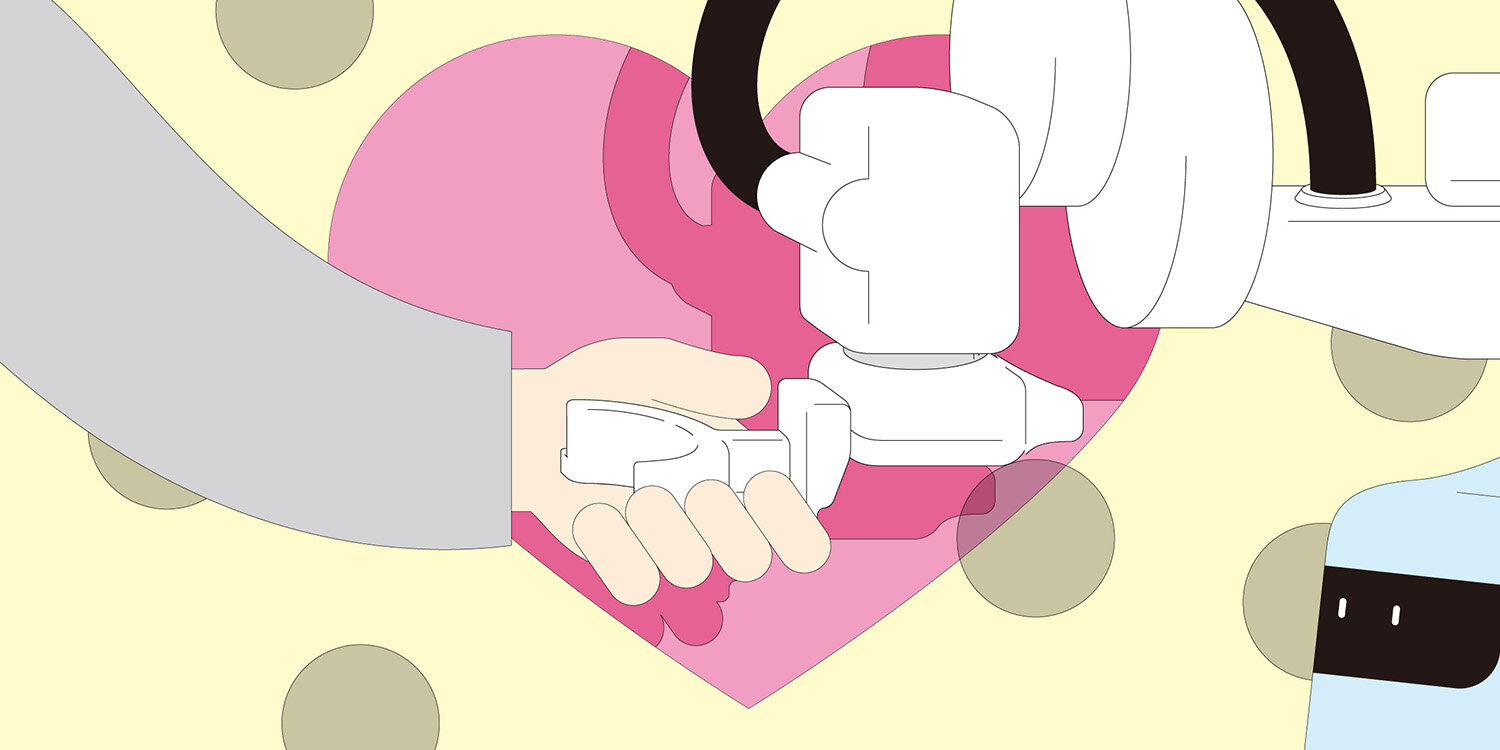 What are collaborative robots? -human partners that provide flexibility for manufacturers

About 60 years ago, industrial robots were created to automate production processes. Since then, the world of "working robots" has evolved day by day. In recent years, collaborative (human coexistence) robots gained particular attention - not as an alternative to people, but to work together with people. Now, collaborative robots are changing the field of manufacturing.

Car, smartphone, TV, washing machine and refrigerator, the list goes on. The existence of industrial robots is essential for the mass production of a wide variety of products with high quality. By attaching different types of end-of-arm tooling, industrial robots can be widely used in applications ranging from painting, welding and assembling to sorting and transportation. Industrial robots are proven to be effective in doing not only monotonous work, but also work in harsh environments, or work that requires long hours, high speed and accuracy. They are also used frequently for tasks that could cause injury, such as lifting heavy objects repeatedly.

Traditionally, there are rules for all "moving machines" in a production site, which include industrial robots. It is required by law to separate the a person’s work area from the machine’s operating area using fences to protect human safety. However, as sensor and software technologies have advanced in the United States and Europe, robots and people can coexist without safety fences if appropriate safety measures are taken. In Japan this law was eased in 2013, and industrial robots can be used without safety fences if measures (ISO 10218 -1/-2: 2011) are taken according to the same standards as in Europe. That's when Japanese robot manufacturers, which produce 60% of the world's robots, started working together to develop the collaborative robot.

In the past, industrial robots have been used mainly by large-scale manufacturers of automobiles, electrical machinery and electronics. At this point robot installation required large-scale peripheral equipment and heavy engineering, which came at a high cost. On the other hand, many people wanted to use robots for small tasks and in small workspaces. They found themselves asking questions like "Are there any robots that can be used in places where robots have never been used before?" A new partner was born in response: the collaborative robot.

Collaborative robots have the following advantages that conventional industrial robots do not have:

Collaborative robots that can stand shoulder to shoulder with people improve production efficiency by placing people and robots in the right places without making major changes to existing equipment and production lines. They also make it possible to implement automation at smaller sites and sites that have not automated before. 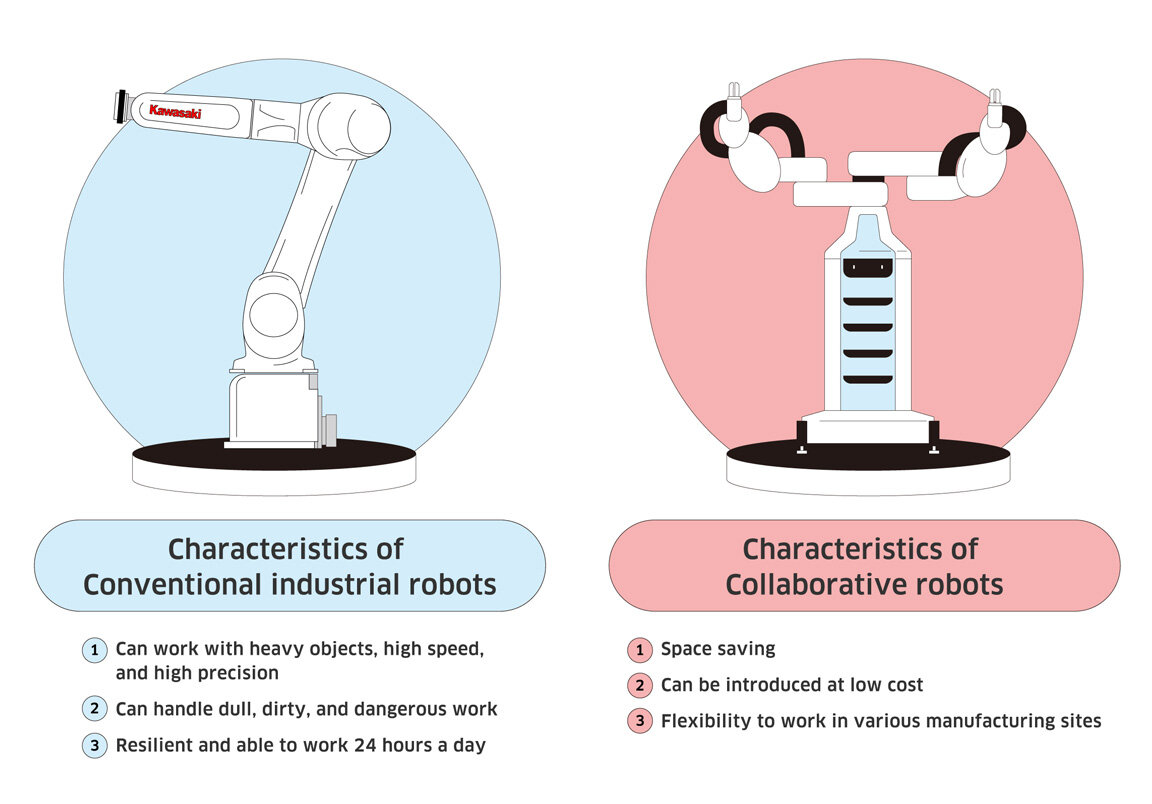 Among the various collaborative robots on the market, Kawasaki Heavy Industries' collaborative robot, "duAro" has two arms and takes up the same amount of space as one human worker. In addition, Kawasaki has reduced the barriers to robot adoption by offering the following features:

For example, in the food industry, the duAro’s dual-arm design is used to assemble a boxed lunch, pack rice balls and sandwiches in a tray, and wash dishes in the same way as a person does. Cosmetics manufacturers use duAro to close lipstick lids and to combine multiple items into one set. Specialized tooling and peripheral equipment is not typically used with duAro in order to maintain its flexibility for short product cycles. Because of this, duAro can replace people without making major changes to the manufacturing layout.

In the field of precision electronics, existing industrial robots require jigs for accurate positioning of each product. But the duAro can positioning jigs with one arm and mount parts with the other, which can increase efficiency and reduce the jig manufacturing cost.

The Kawasaki duAro robot has also been able to assist during the COVID-19 pandemic. In this application, one arm acts as a gate for visitors to the museum and the other arm automatically measures the temperature of visitors. This flexibility in responding to the demands of the times demonstrates both the appeal and the potential of collaborative robots. 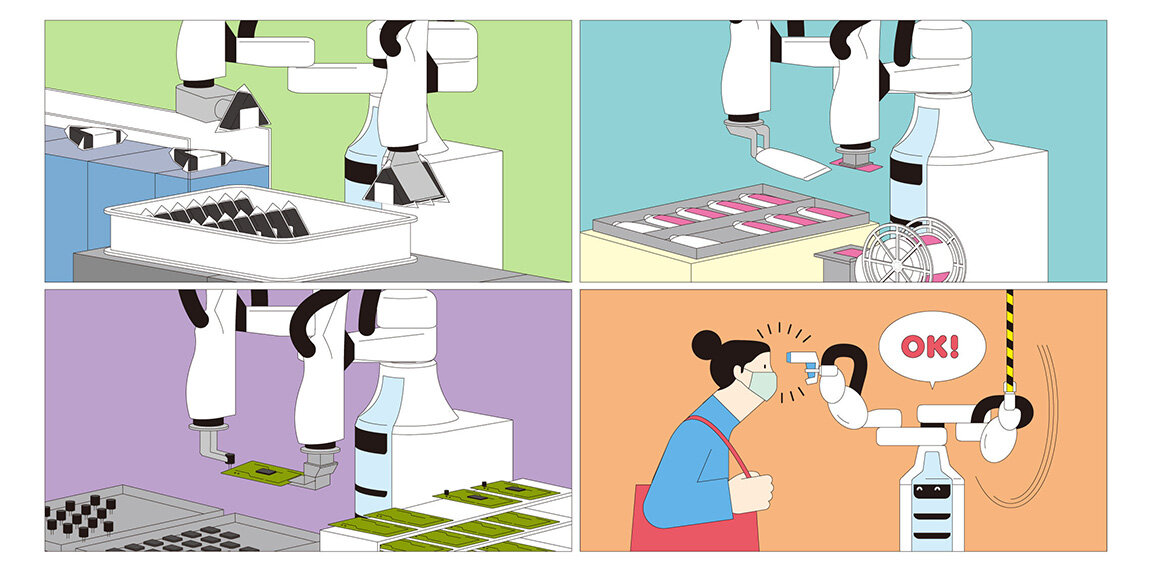 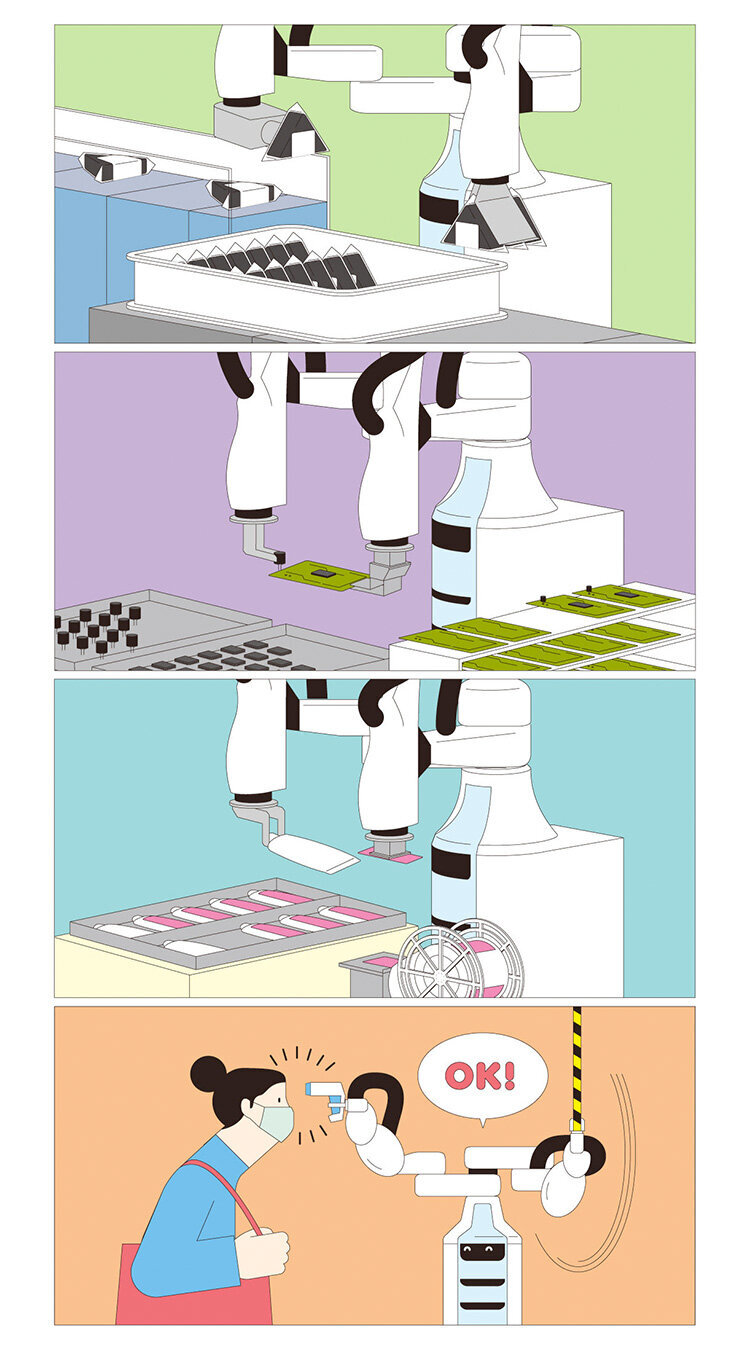 An Expanding Market for Collaborative Robots

Demand for industrial robots will increase in the future as manufacturing sites face further labor shortages and demand for high-mix low-volume production. In particular, collaborative robots can be introduced more easily than traditional industrial robots, so the opportunities for their use are expected to increase. In the future, as sensors, vision, and other “sensation” technologies evolve, collaborative robots will be able to perform more human-like tasks. And, eventually, with the development of artificial intelligence (AI), robots may be able to learn their own movements and automate tasks without programming. It is only in the future that collaborative robots will show their true abilities as human partners.