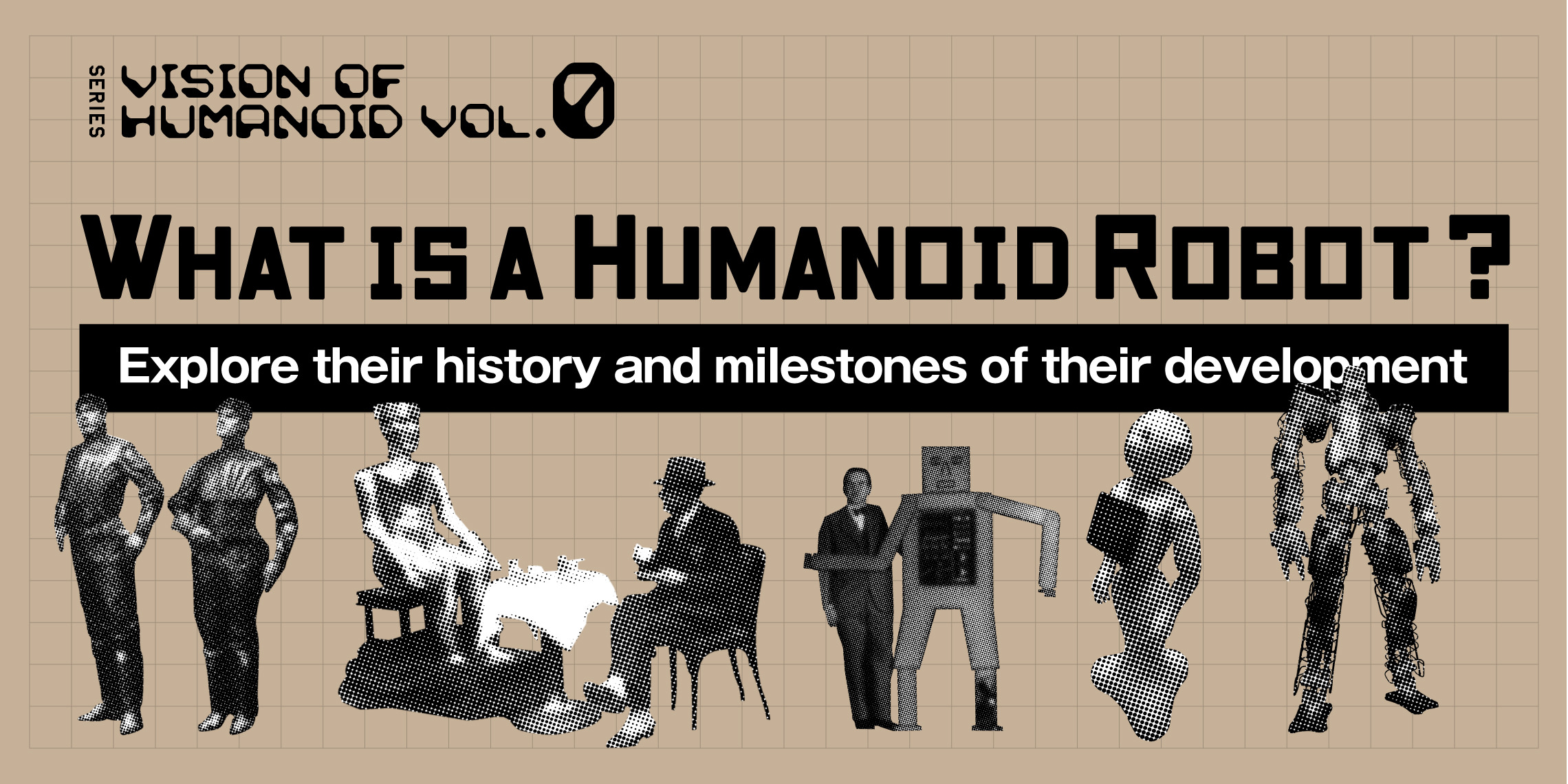 What is a humanoid robot? Explore their history and milestones of their development

About 70 years have passed since the birth of Astro Boy, the son of science. People have long dreamed of a future in which humanoid robots that look like them will become everybody’s friends. And now, in the industrial world, research and development of humanoid robots is accelerating. The day when the son of science coexists with human society may be approaching reality. How far have humanoid robots come and where are they going? Let's follow their footsteps.

Robots in a fantasy world

In short, robots are defined differently in academic, industrial, and artistic worlds. In particular, it seems the robots that live in the world of science fiction are most familiar to us.

In the first place, the word robot is said to be derived from the Czech word "robota,” meaning hard work. The most widely held theory is the word “robot” was first used in R.U.R (Rossum's Universal Robots), a play written by Czechoslovakian writer Karel Čapek in 1920. This satirical story doesn't feel old even when read today, because it touches on the concept of artificial human beings capable of doing human work.

The robots that appear in R.U.R are so-called humanoid robots that do manual labor such as typing and bookkeeping. They have limbs and faces, and are able to walk, run, talk and fight. The story of a dynamic humanoid robot gained enormous popularity and, just three years after its publication, it was translated into 30 languages. The word “robot” seemed to take root quickly.

Since then, we’ve seen humanoid robots featured in Metropolis (1927) directed by Fritz Lang, I, Robot (1950) by Isaac Asimov, Astro Boy (1952) by Osamu Tezuka, the Star Wars franchise and many more. The humanoid robots from the 2D world have steadily evolved into the 3D world, making them more realistic than ever.

In the late 1920s, three humanoid robots appeared in the real world. Westinghouse Electric Corporation, a general electrical appliance maker in the United States, invented the "Televox" to control electric appliances remotely. W.H. Richards in England and Alan Refel, an aircraft engineer, invented the "Eric " to be able to stand and sit. And lastly, Japanese biologist Makoto Nishimura invented the "Gakutensoku," which changed facial expressions and was able to write Japanese characters. Making the leap from a 2D world to a 3D world, this is when humanoid robots started to appear in reality.

Over the past 40 years, a wide variety of humanoid robots have emerged in Japan, including Waseda University's WABOT, Honda's ASIMO, SONY’s QRIO, Fujitsu's HOAP, Kondo's KHR Series, and the HRP series jointly developed by National Institute of Advanced Industrial Science and Technology and Kawada Robotics. Even Sony's AIBO, a canine robot that serves as a pet, has appeared.

Humanoid robots have long attracted smiles as performers in roles where they simply had to walk, run or dance. But in recent years, more and more robots have emerged with the main purpose of interacting with human beings. In 2014, Softbank announced Pepper. In 2015, Vstone announced Sota. And, in 2016, Sharp announced Robophone. All of these robots were developed as service robots with a humorous communication style that emulates human figures.

While these robots are used mainly for entertainment, humanoid robots made to perform hard labor tasks are finally becoming a reality.

Humanoid robots that utilize some of the most advanced technology are being created around the world. Under the auspices of DARPA (Defense Advanced Research Projects Agency), Boston Dynamics developed a quadruped robot, SPOT and a humanoid robot, Atlas. After showing off its acrobatic parkour skills on YouTube, Atlas became incredibly well known.

In the world of mobility, Toyota introduced what it calls the Wholebody Tele-operation for Humanoid Robot (T-HR3). This is an avatar (alter-ego) style robot that replicates the actions of a pilot equipped with a skeletal control system by measuring and transmitting the specific movement and torque. Through its T-HR3 research, Toyota is trying to create an entirely new way to utilize virtual mobility services. Yamaha Motor developed the human-like autonomous riding robot, MOTOBOT. Althought the MOTOBOT was initially created to beat the world champion of MotoGP, Valentino Rossi, in the future it is expected to work as a test rider. It will test vehicles’ driving performance under the limit conditions awhile acquiring quantitative driving data.

Moving toward the social implementation of humanoid robots

There are many industrial and acadmeic organizations that are beginning to research humanoid robots. And while robots that can perform impressive tricks like backflips, playing instruments or cooking are attracting attention from the media, the humanoid robot that is closest to taking on laborious tasks for human safety is Kawasaki's Kaleido. This humanoid robot is roughly 180 cm tall and weighs about 85 kg. Kaleido’s body shape and strength are very close to a human adult, which would allow the robot to take on dangerous tasks that put humans at risk.

For example, this type of humanoid robot is expected to be used in disaster sites that are unsafe for humans to enter. If a humanoid robot has the same body size as a human and can move in the same way, it can use the same protective clothing, tools and vehicles designed for human use. Needless to say, the environment of the world is designed so that people can live and work. A major benefit of humanoid robots is that they can be used without having to significantly change these environments.

Kawasaki Heavy Industries, Ltd. has used their thorough knowledge of manufacturing sites to develop a durable humanoid robot based on the following concept: It won't break even if it falls down, and it is easy to repair even if breaks. This concept is based on Kawasaki’s commitment to being truly active and impactful in the real world. Kawasaki believes unless robots work 365 days a year, 24 hours a day, and clear the realistic challenge for daily use which includes durability, reliability, maintainability, and versatility, they will not become effective humanoid robots that humans can leverage to make life easier.

Kawasaki Heavy Industries, Ltd., a company that has led the industrial robot industry for over 50 years, has invested accumulated technologies and resources to develop their humanoid robot, Kaleido. While it is still evolving, Kaleido is moving steadily forward step by step. It may not be long before this robot is implemented in society.

Column : What's the difference between "humanoid", "android" and "cyborg"?

Humanoid
A combination word of human and -oid (like). It is generally used as a generic term for humanoid robots. In science fiction, C-3PO from the Star Wars franchise is a famous humanoid robot. In a broad sense, this term includes the mobile suits seen in the animation Mobile Suit Gundam (1979), the labor in Mobile Police PATLABOR (1988), EVA of Neon Genesis Evangelion (1995) and so on.
Android
A combination of the Greek word meaning man (andro) and -oid (like) for human. The feminine form is sometimes referred to as a gynoid by combining the Greek word gyn for female with -oid. Among humanoids, it has an infinitely human-like appearance. In science fiction, Rachel in the movie 'Blade Runner' (1982) is a famous android. (In the film androids are called replicants.)
Cyborg
This term combines cybernetics (artificial intelligence) and organization (organism). It mechanizes a part of the body either to complement a lost part, improve a weakened function, or to enhance a person's ability. Among science fiction stories, the film RoboCop (1988), TV drama Kamen Rider and Shotaro Ishinomori's cartoon Cyborg 009 feature famous cyborgs.