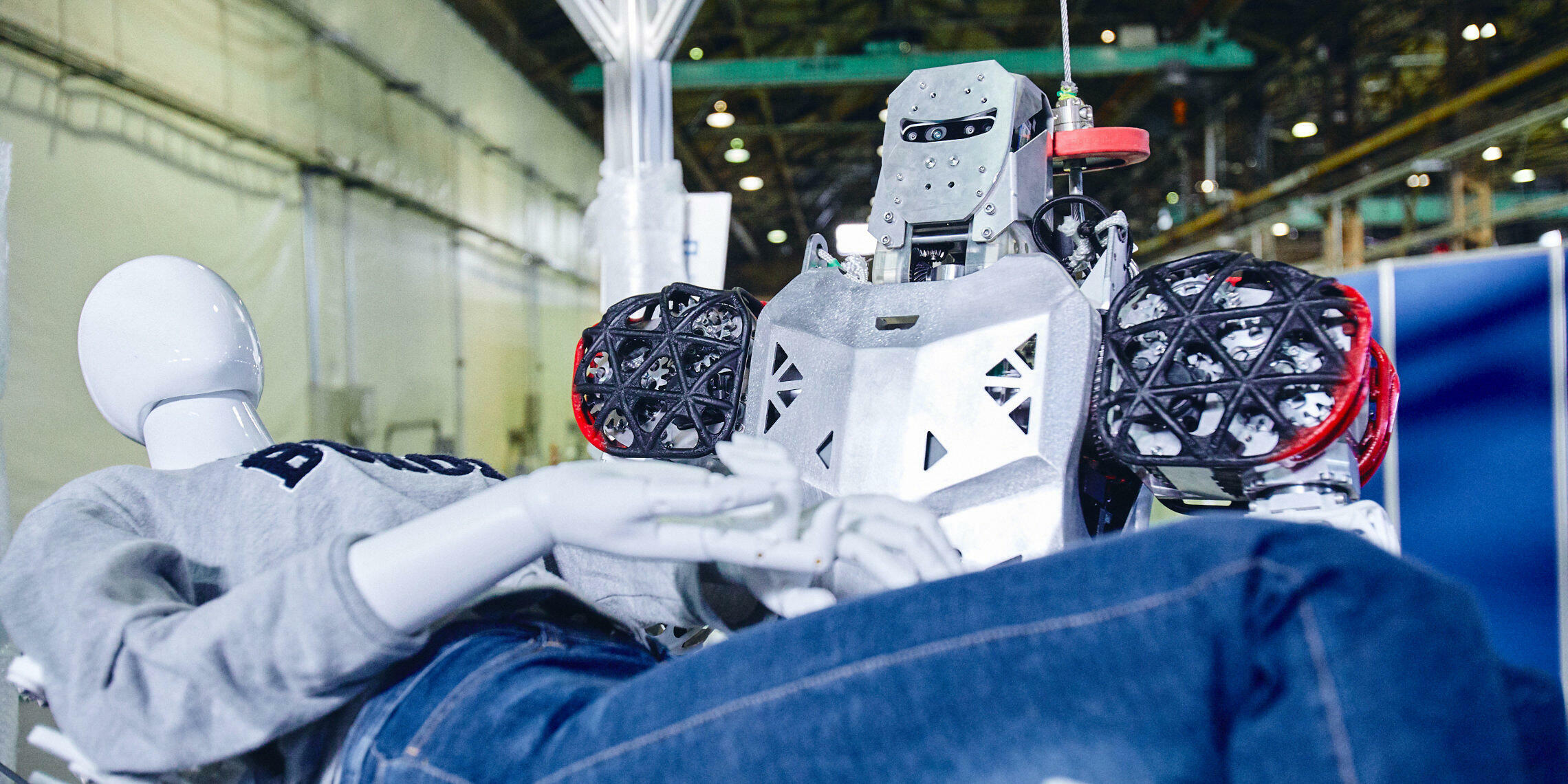 Imagine a future where humanoid robots are dispatched to disaster sites or play a key support role in elderly care. Although a scene from a science-fiction movie might spring to mind, many people may find it hard to imagine how robots would actually function in the real world.

One company working in earnest to practicalize humanoid robots is Kawasaki Heavy Industries, or Kawasaki. Two years have passed since the company debuted its concept humanoid robot at the International Robot Exhibition (iREX) 2017. At iREX 2019, held at Tokyo Big Sight from December 18 to 21, 2019, Kawasaki unveiled Kaleido, an evolved version humanoid robot equipped for a role in real-world applications.

One of the standout technologies exhibited at iREX2019, we look at how the latest model Kaleido has evolved, its features, and the dreams of the team at Kawasaki who worked on its development.

Let’s start with a quick profile of Kaleido.
At 178 centimeters in height and weighing in at 85 kilograms, its size is virtually identical to that of an adult male. With the ability to bench press around 50 to 60 kilograms, it also has power to match—or even better—the average human. The robot’s movements are driven and controlled by motors at 32 axes.

With a view toward roles in environments which humans inhabit—such as traveling along the same paths that people use, or using the same tools as humans—the development team were dedicated to creating a robot that was human size.

The name Kaleido was chosen to represent the “ever-changing, unlimited evolution, sparkle in the sky” concept of the project. As well as coexisting harmoniously with humans in our ever-changing society, its name also represents its creators’ ambition to create a robot that can support humans in difficult situations, such as complex and unpredictable disaster sites.

During its debut at iREX2017, it displayed the ability to pick itself up from a fallen position, as well as showcasing its prowess at lifting dumbbells and performing pull-ups. For more details, see the article below written at the time of the event.

The Next-Generation Robots by Kawasaki - Soon to Become "Robots Next Door"? 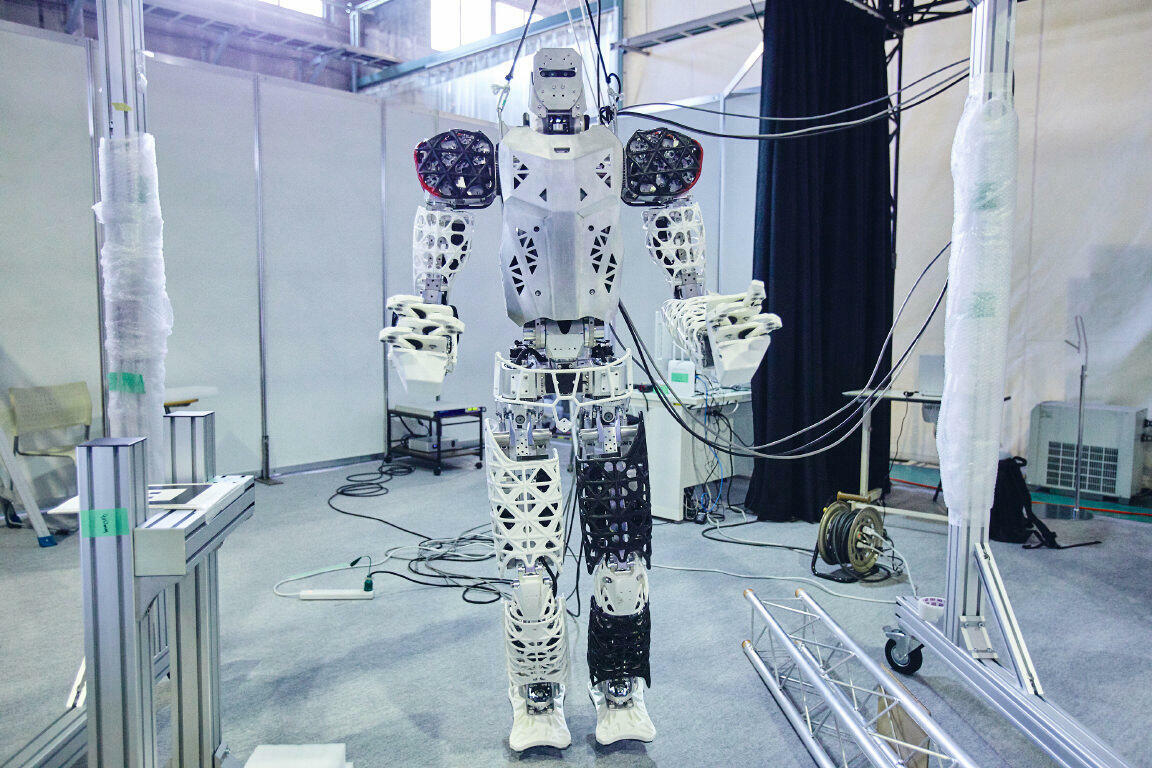 So how has the latest model evolved? Let’s take a look at its features one by one. 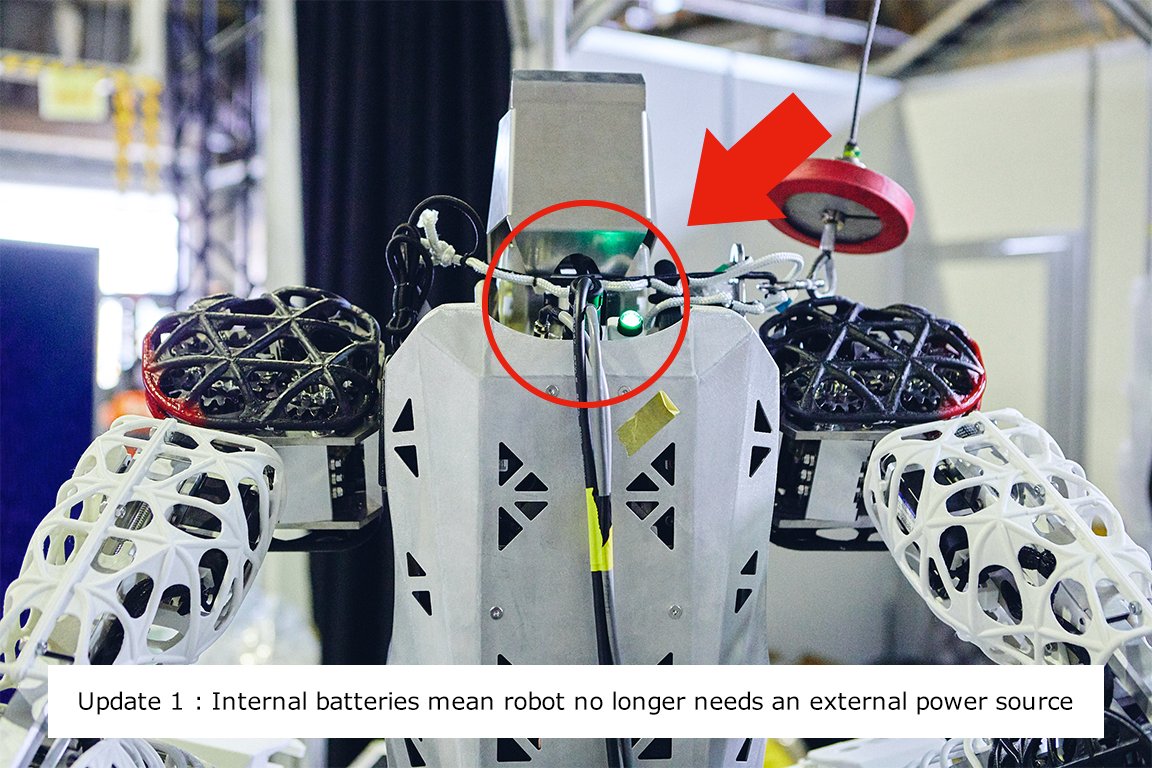 Kaleido, the latest version, is equipped with an internal battery, making it capable of standalone movement*. Two years ago it was connected to cables, including four industrial robot controllers and a power supply lead. Eliminating these cables represents a major step toward practicalization. Visitors to iREX2019 were able to witness Kaleido moving about freely.

As this interview took place at Kawasaki's development center, Kaleido has fall prevention and power cables attached in the above photo. 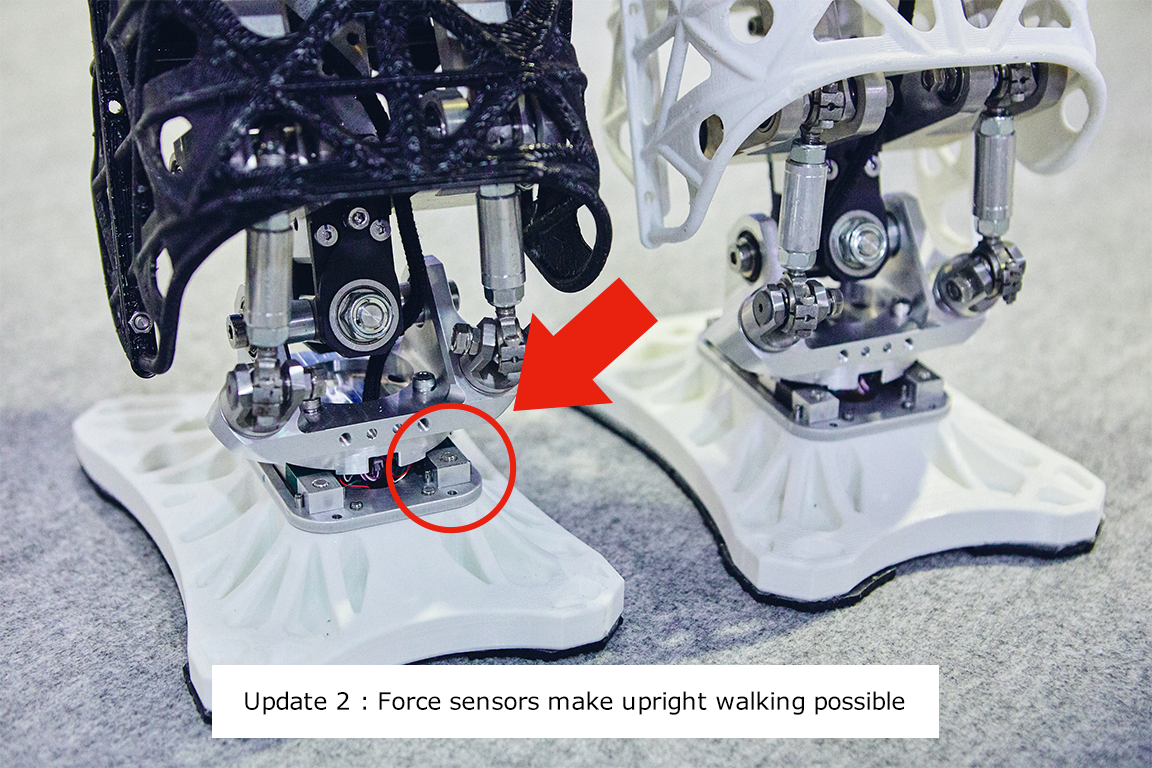 The second feature of Kaleido is bipedal locomotion—the ability to walk on two legs. Although this movement comes as second nature to humans, recreating this motion in robots is an extremely complex task.

Sensors that measure the robot's balance play a key role in achieving bipedal locomotion. The sensor system that supports Kaleido's movement was developed under the direction of Professor Masayuki Inaba, who is based at the Jouhou System Kougaku (JSK) Laboratory of joint research partner, the University of Tokyo. Force sensors located in the ankles control the robot to prevent it from falling. It was the introduction of these sensors that allowed Kaleido—which had previously only been able to walk on all fours or holding onto surrounding objects—to walk upright unassisted. 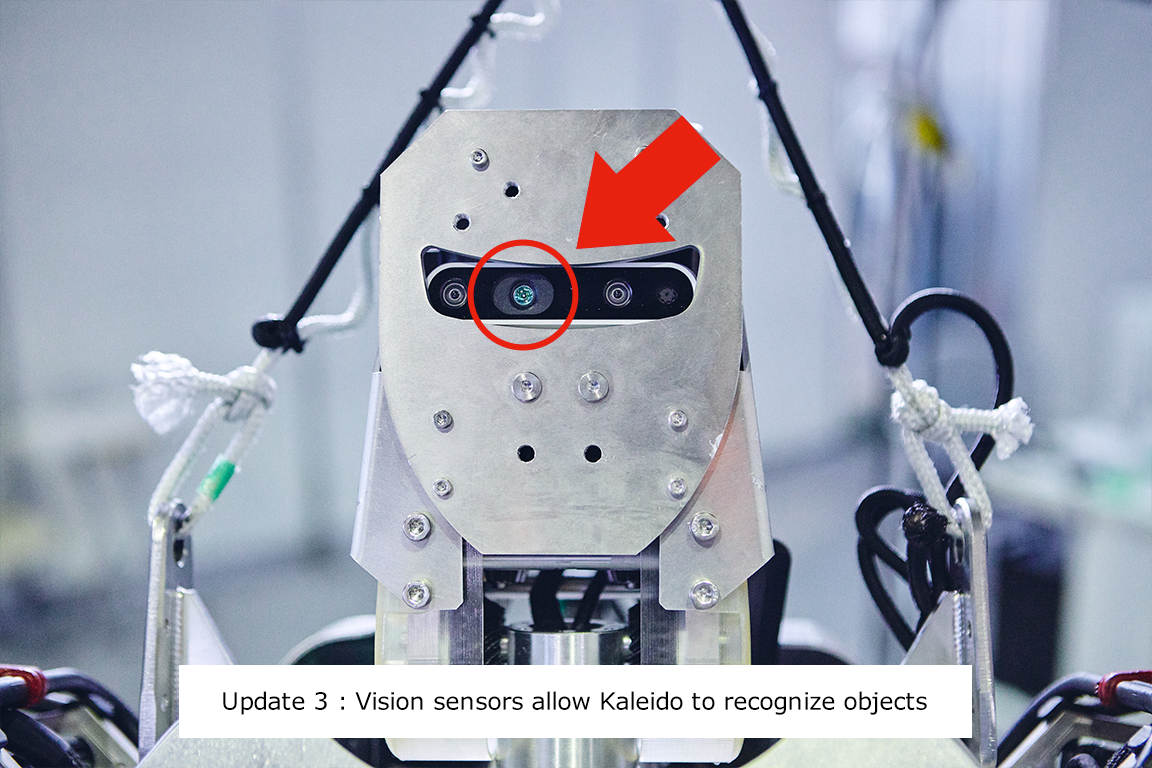 The introduction of vision sensors—in other words a camera system that performs the role of a human eye—allows Kaleido to search out specific items in order to perform work tasks. For example, it can pick up a plastic bottle in front of it, or walk toward a target object.

The photos below show that Kaleido recognizes that a post has fallen on the floor, pick up, and transport it.

Recognizing, picking up, and carrying an object—seeing Kaleido accomplish these basic human tasks with assuredness conjures up images of a future where humanoid robots play a key role in society

Developing Kaleido—a robot that demonstrates how humanoids can benefit society

Born from a vision of a robot that could assist humans, development of Kaleido is already advancing with a specific image in mind, namely providing support at disaster sites. We talked to lead researcher Masayuki Kamon of Kawasaki's Innovative Robot Department about Kaleido, which was unveiled at iREX2019. 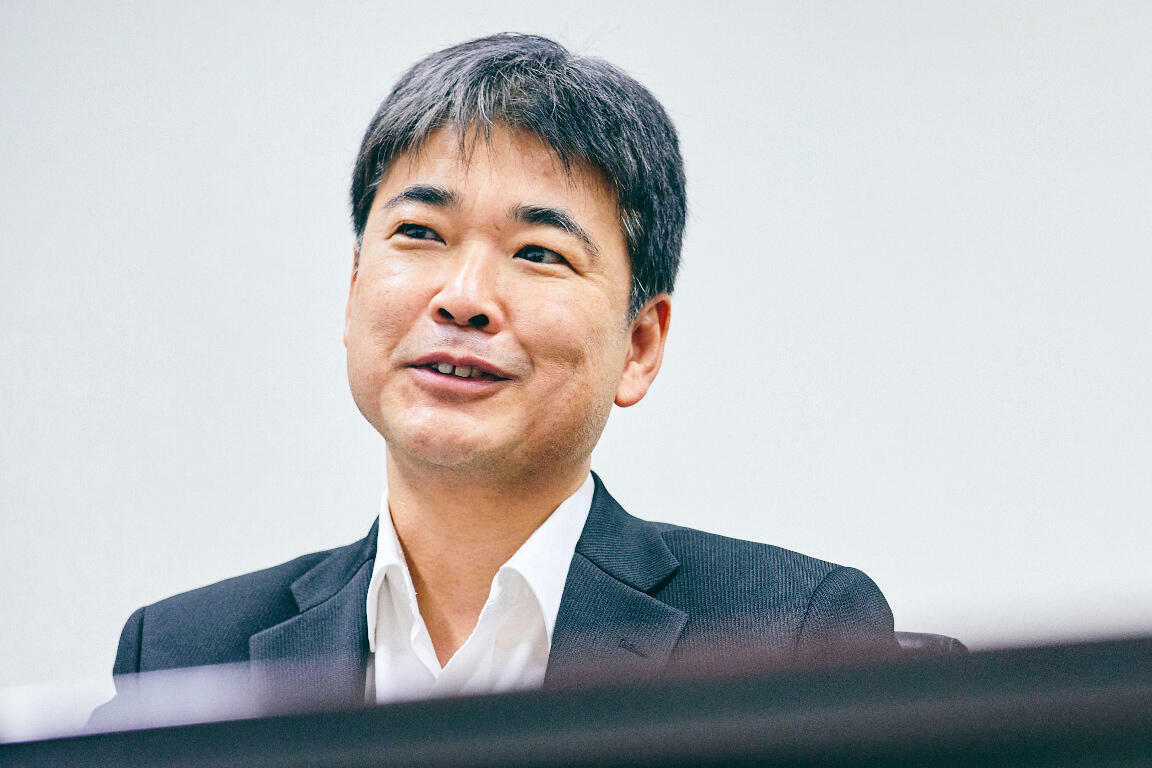 ―What are some of the difficulties involved in developing humanoid robots?

Kamon: “One direct factor is the difference between the weight a robot can hold (weight capacity) and the weight of the robot itself. For example, an industrial robot that can lift 80 kilograms typically weighs around 500 kilograms itself. However, in order to develop a robot that could provide support at disaster sites—one of our main goals—we needed to create a model weighing about 80 kilograms that could carry an 80 kilogram human. To lower the robot's weight while increasing its weight capacity, we went through a series of painstaking efforts, such as creating the exoskeleton from a resin polymer material.”

Although much of the know-how related to industrial robots and humanoid robots can be cross-applied, there are also many aspects that differ. The team is trialing many initiatives not normally applied in industrial robot development, and is working at full pitch to cycle through the concept, design, prototyping, and evaluation phases in order to further evolve and improve Kaleido's capabilities.

―Tell us about the vision behind Kaleido's development, and any interesting episodes that occurred along the way

Kamon: “Our first humanoid robot, which we unveiled in 2017, was fitted with cables connecting its controllers and power source, and somewhat resembled a dog on a lead. Some visitors told us that what we'd developed still couldn't be considered a humanoid. So for iREX2019 we were determined to fit our robot with an internal power source, no matter what—this was one of our key development goals. Our efforts paid off, and this time we were able to showcase Kaleido, free of any leads.

However, internalizing the power source makes the humanoid body heavier—which in turn slows the robot's walking speed. To give Kaleido the ability to step nimbly, we worked relentlessly to make everything as lightweight as possible, and were eventually able to "slim" Kaleido down to its 2017 weight.”

When the team began working on the project, it was a series of trial and error, and many wondered whether they would really be able to build a humanoid robot and it could benefit humans.

However, now the team has a different vision—for Kaleido to play a beneficial role in society. Boosted by their accomplishments thus far, they now believe this goal is in reach. Driven by a desire to build a robot that can truly benefit people in real-world situations, Kawasaki will continue pushing forward toward practicalization.

Although the functions added to the latest model may not be flashy to look at, each is essential in order to achieve the goal of a humanoid robot that can benefit humans on a societal level. It is evident that Kawasaki is serious about deploying this technology in the real world.

iREX2019, which opened on December 18, featured a range of exhibits showcasing the latest technology such as this Kaleido, who returned to the event in 2019 with the newfound ability to walk upright, was the star of a permanent display in which he showed off his walking skills on a treadmill. Furthermore, during demonstrations held several times a day he entertained the crowds in a show that combined disaster support with dance. The event provided a window into an exciting future in which robots will play a key role alongside humans.

The following article provides further information on the background and vision behind Kawasaki's humanoid robots—take a look!