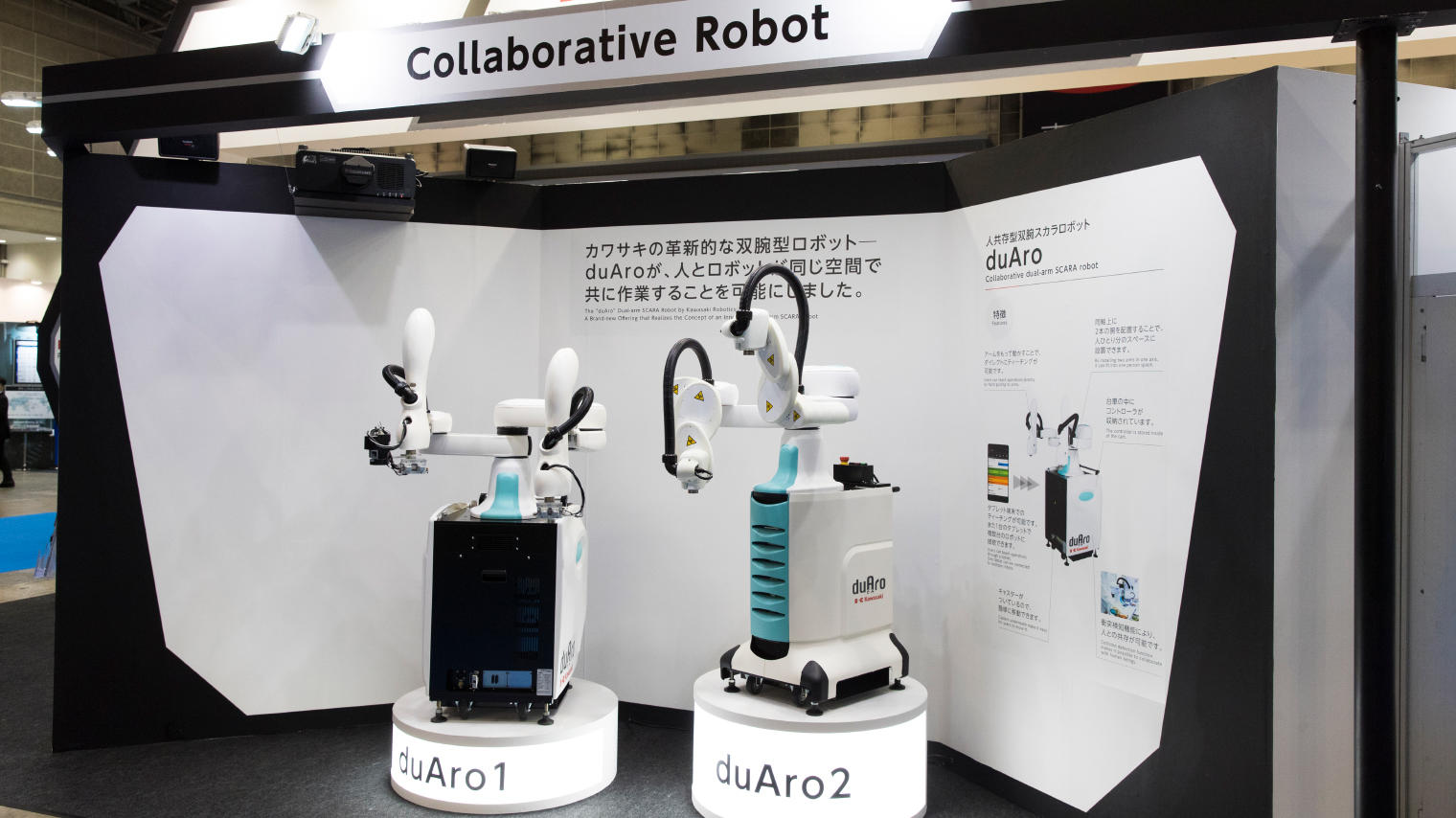 In June 2018, a new model of the dual-arm SCARA robot "duAro" series, the duAro2, was released. The duAro is a collaborative robot (cobot) first launched by Kawasaki Heavy Industries, or Kawasaki, in June 2015. Like humans, it has two arms and is capable of working alongside humans in the same environment. While the series’ inaugural duAro1 model specializes in horizontal motion, the duAro2 improves upon its capabilities, extending the range of its arms’ vertical stroke from 15cm to 55cm, and increasing the maximum payload of each arm from 2kg to 3kg.

Shogo Hasegawa (GM of FA Solution Second Department of Robot Business Division in Precision Machinery & Robot Company) is known as the “Father of duAro”, who has been involved since development of duAro1 first began. He spoke about the intent of developing the duAro2 and the story behind it. 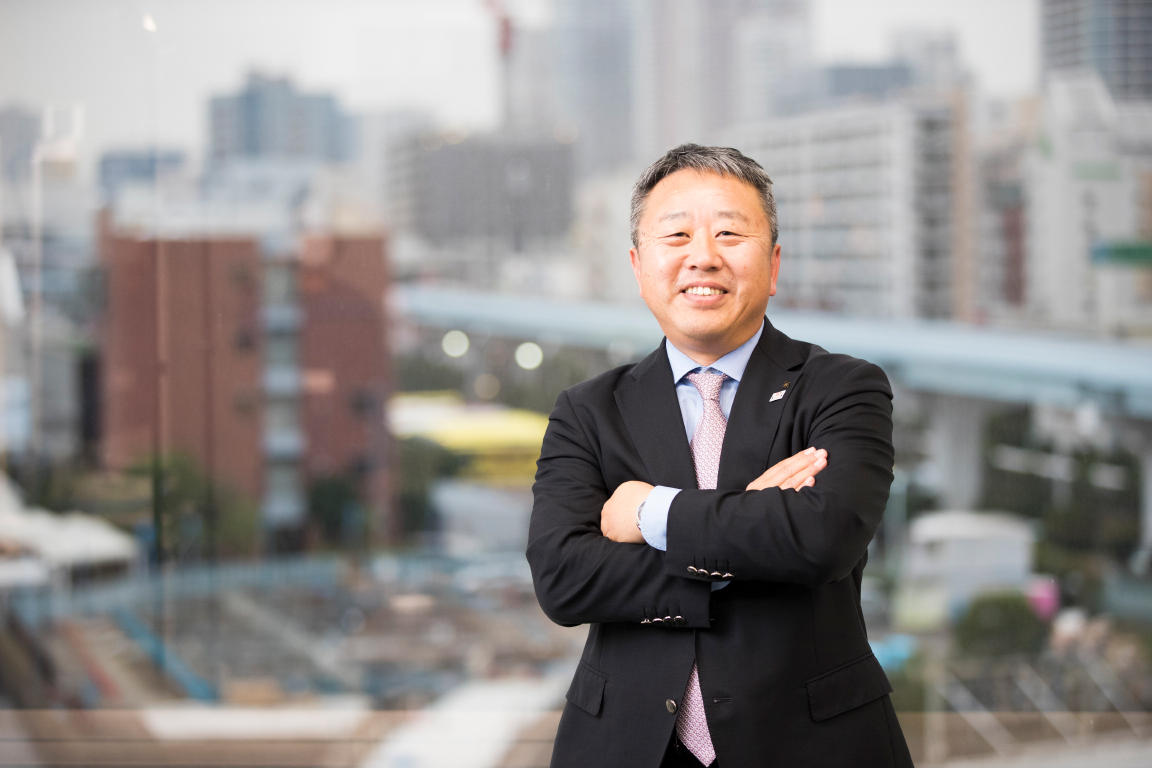 duAro2 covers what the duAro1 alone could not automate

The duAro1 was designed with safety and ease of use in mind, and since its launch has been operating in sites needing robots, performing tasks such as turning screws on circuit boards or packing Japanese rice balls into cases. To learn more about the birth of the duAro1, please see this article.

After the launch of the duAro1, Hasegawa realized that there were still processes in manufacturing sites that had strong demand for automation. One such process is boxing, a task difficult for the duAro1 because it specialized in horizontal motion.

“In most production lines in factories manufacturing small electronic devices, products are packed in boxes prior to shipping. This task is generally handled by humans. The vertical range of the duAro1’s arms is 15cm, yet the depth of common cardboard boxes is around 40cm to 50cm and therefore, the arms cannot reach the bottom.

With that said, if we kept its present configuration and simply extended its arms vertically to increase the range of its motion, a length of over 50cm would be required, interfering with operation. This was a challenge the duAro1 could not handle.” (Hasegawa)

For the duAro2, the vertical movement mechanism of the arms was reconfigured to a linkage that would enable them to fold like human arms. This change made it possible to lengthen its vertical stroke while keeping the overall range of motion compact.

“With the vertical range now extended to 55cm, the duAro2 makes it possible handle boxing and other work performed on uneven surfaces, something which was difficult to do with the duAro1.” (Hasegawa)

duAro1 gets a simultaneous update as well. The duAro series keeps evolving

The duAro2 is not the only upgrade; the duAro1 is continuously being updated based on feedback from users. The following chart outlines the enhanced specifications of the duAro series.

Point 1： Vertical range of the arms on the duAro2 is 55cm
The duAro2’s arms now have a vertical range of 55cm. This allows the duAro2 to handle tasks that require up-down motion and a deeper reach such as boxing items into cardboard boxes.

Point 3： Vision function is easier to use
A separate computer dedicated to image processing was traditionally required to use the vision function, a feature that identifies work objects using a camera. However, the new F Controller can handle image processing alone; it only needs an optional camera and software to work, making for a cost-saving solution.

Point 4：Separable controller
The original duAro’s characteristic feature is having the controller integrated with the arms. However, to make factory layout more flexible, customers have the option of choosing a detachable-arm solution in which the arms and the controller can be separated. It is adaptable to a wide variety of needs in manufacturing sites. For example, customers can choose to install only the arms on their facilities such as conveyers.

The duAro series continues to expand its field of play

The first duAro launched in 2015 and recently had a new model released. Hasegawa discusses his thoughts on market reaction and his vision for the future. 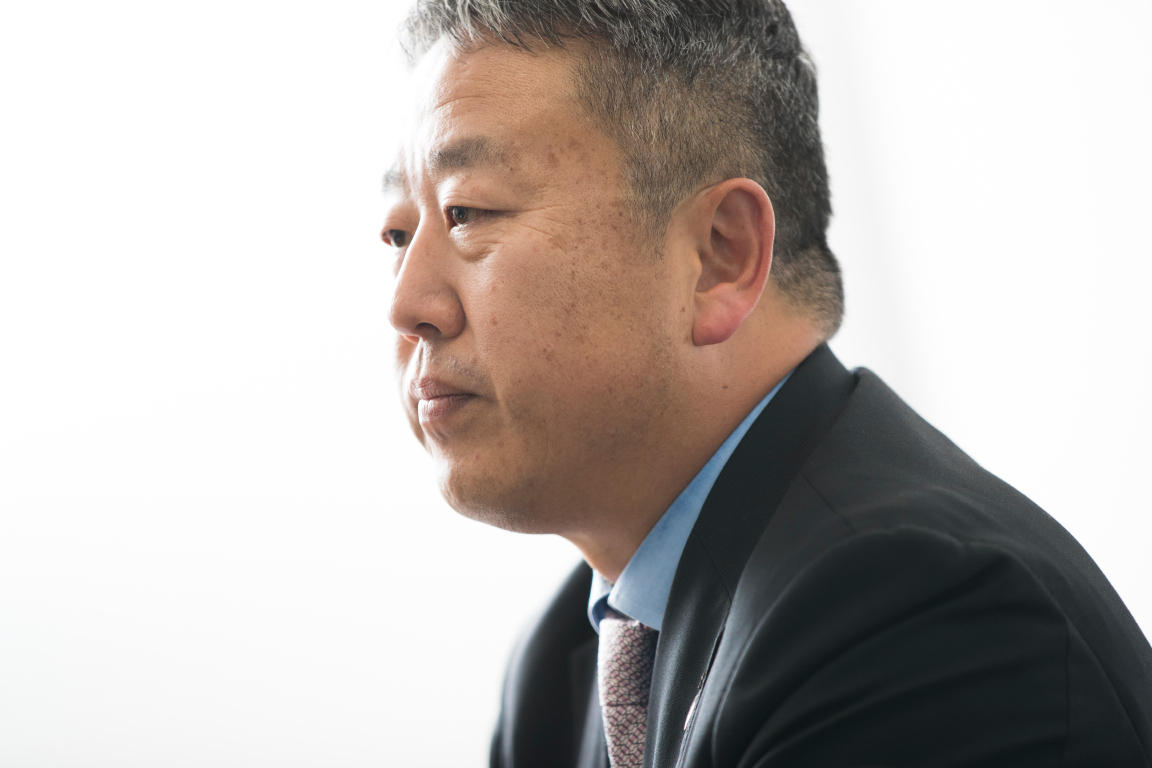 “The duAro series was originally developed mainly with the electrical and electronics industry in mind. However, the duAro is highly versatile, so it can be installed in any environment humans work in.

For example, we have been receiving a lot of feedback from food industry, an area we never considered at first. The food industry is facing serious labor shortage issues. In the case of a bento box factory, three shifts are required in order to keep up with 24-hour operation and dispatch shipments three times a day.

There are many other industries with the same issue. Many manufacturing sites need the help of duAro.” (Hasegawa) 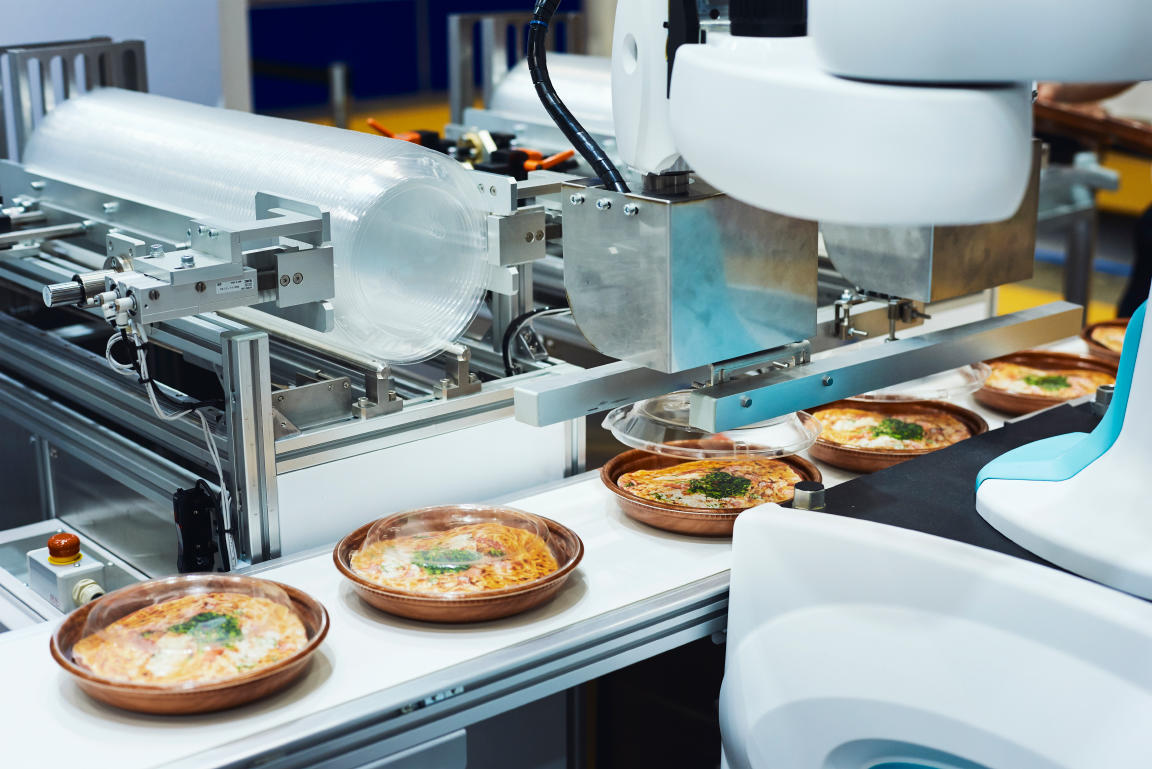 Hasegawa also touched upon the direction development is headed towards the duAro3, the next generation in the series.

“Limiting movement and concentrating on simplicity of use was our main focus during the development of the duAro series. For the duAro3, we plan to add wrists, giving it the ability to handle more complicated tasks.

However, just increasing the number of axes will contradict with its fundamental concept of being easy to operate.

Make more complicated movements possible while pursuing ease of operation—balancing these two conflicting themes is not easy. But I believe that the next-generation model can be launched when this goal is achieved.” (Hasegawa)

The duAro series continues to evolve, responding to the voices of manufacturing sites. Once the duAro3 is introduced, these robots should be able to further contribute to solving the labor shortage issue. The adoption of collaborative robots in Japan and throughout the world is only at the beginning stage. Let’s follow along and see how Kawasaki’s duAro robots will leave their mark in the future.