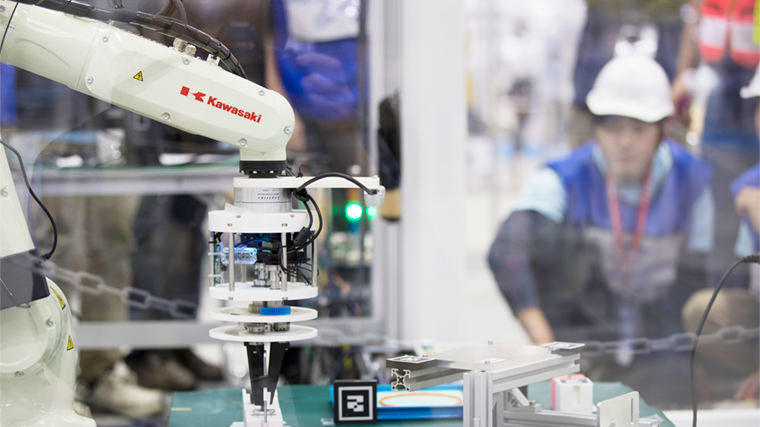 The World Robot Summit 2018 (WRS2018), an international competition for robots, was held at the Tokyo Big Sight for 5 days from October 17 to 21, 2018. The World Robot Summit, or WRS, is a major event for robotics hosted by the Ministry of Economy, Trade and Industry, and the New Energy and Industrial Technology Development Organization (NEDO), with the goal of accelerating the social implementation of robots amidst a rapidly aging society, and the 2018 summit served as a precursor to the main competition (WRS2020) set to take place in 2020, the same year Japan will host the Tokyo Olympic and Paralympic Games.

This article highlights the Industrial Robotics category of the competition, detailing the performance of robotics engineers and researchers from around the world as they went head-to-head over the course of four days.

The World Robot Challenge （WRC) robotics competition is made up of nine challenges in four categories: Industrial Robotics, Service Robotics, Disaster Robotics, and Junior. 126 teams from 23 countries and regions participated in this year’s event. For the Industrial Robotics category, 16 teams—with half of those coming from Asia, Europe and the U.S.—joined. 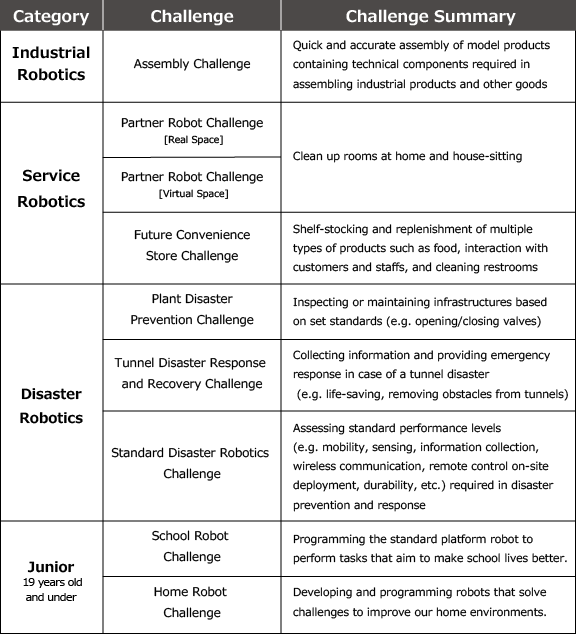 For the Assembly Challenge of the Industrial Robotics category, the focus of this report, participants compete against each other, taking the concept "Toward agile one-off manufacturing", to both respond to the needs of the manufacturing industry utilizing their skills and technologies, and work towards the development of production systems that can be used in actual manufacturing sites, all in an effort to accelerate the social implementation of robots. Taking into account future implementation in real-world manufacturing sites, the challenge is meticulously designed and requires not only quick assembling but also the agility to respond to sudden setup changes.

In order to keep with the purpose of accelerating the social implementation of robots, industrial robots that are actually employed in manufacturing sites today are used for this competition. This aspect draws a clear line between this challenge and typical robot competitions where participants create new robots. Each team can use an existing industrial robot which they prepare themselves or one lent by companies. Kawasaki Heavy Industries, or Kawasaki, supporting WRS2018 as a global partner, also provided its industrial robots for teams to work with. One team, hippopoTaMus, organized by students of Tokyo Metropolitan University battled it out using Kawasaki’s RS007 small-payload robot （details following).

Rules of the Assembly Challenge

The end goal, the product for the Assembly Challenge is a Belt Drive Unit assembled with 18 parts including a motor and belt. Once the Belt Drive Unit is correctly assembled and powered on, it winds up a string, lifting a Dorayaki cake and delivering it to Doraemon, the supporting mascot of WRC. 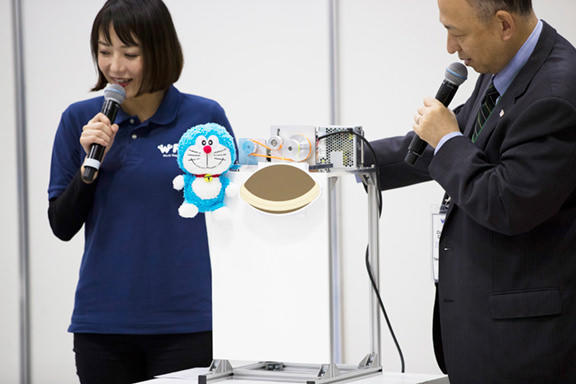 Whether Doraemon can enjoy his Dorayaki cake or not is entirely up to how the Belt Drive Unit is assembled.

The Assembly Challenge is comprised of three tasks: Task Board, Kitting, and Assembly. Points are awarded for each task, with a maximum of 550 total points possible. 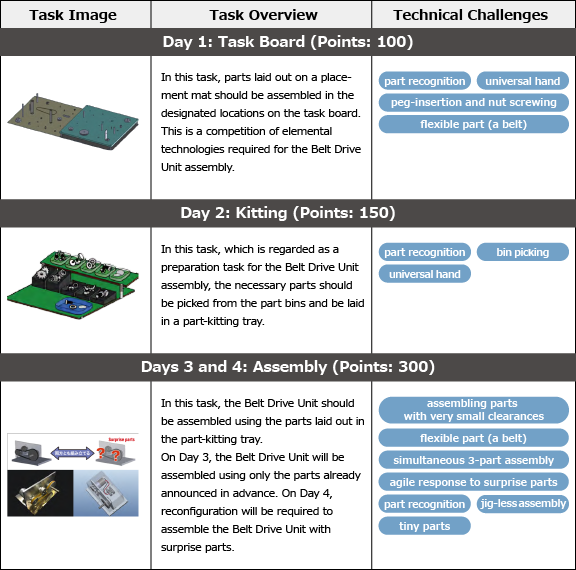 Task Board Task
This is a competition that tests a robot’s abilities in parts recognition and grasping, autonomous teaching and other underlying technologies. In this task, Belt Drive Unit parts laid out on a placement mat have to be assembled in designated locations on the task board. Parts are distributed 10 minutes before the start of competition, giving participants little time to preprogram movements for their robot. A maximum of 100 points can be awarded.

Kitting Task
In this task, each team prepares for assembly. Each team’s robot is required to pick up only the necessary number of parts needed to assemble the Belt Drive Unit from three different part bins （small, medium and large)and place them in the locations specified on the part-kitting tray. Parts are randomly placed in the bins, so robots will need to be able to properly recognize and pick up individual objects. A maximum of 150 points can be awarded.

Assembly Task
The Belt Drive Unit is assembled in this task. Being able to adeptly coordinate two arms is required in order to simultaneously handle three parts, such as when fixing a motor by pressing it on a plate and securing it with screws on the other side. Handling flexible parts such as the belt is also difficult.

The assembly task takes place over two days. On the first day (Day 3) of this task, all the parts used are announced in advance, but for the second day (Day 4), there are surprise parts included as well. These surprise parts are distributed one hour before the start of competition, so how quickly the teams can reconfigure on-site is crucial. The surprise parts actually given are five different belts, categorized into different levels of difficulty (0-4), that vary in characteristics such as size, material, and pulley diameter. The number of points awarded depends on the difficulty level of the part. Whether teams decide to choose a more challenging surprise part and try to score higher points, or select a part with a lower difficulty rating to secure a certain number of points is also a strategic consideration for this competition. A maximum of 100 points can be awarded on the first day （Day 3) and 200 points on the second day （Day 4) for a total of 300 points.

Results of the Competition and Remarkable Teams

The winner of Assembly Challenge was the SDU Robotics team from Denmark. Despite not being able to complete the assembly task, they scored an overwhelmingly high 92 points in the task board task on Day 1 and kept their lead until the end. The tip of their robotic arm is produced with a 3D printer, and the team was able to print out a tip designed specifically for the surprise parts on-site. 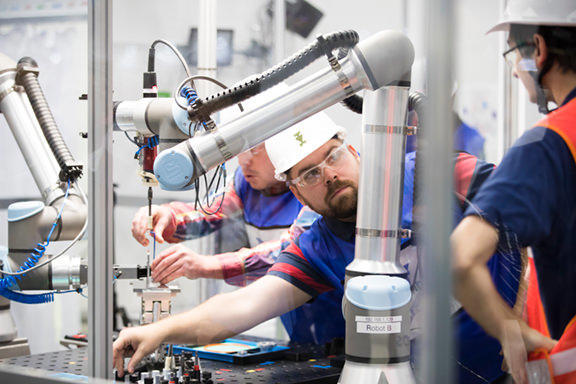 It was obvious that many teams had a hard time with the extremely difficult assembly task, the highlight of the Assembly Challenge, as even the winning SDU Robotics team failed to complete the task. At the end of Day 3, no team could complete the Belt Drive Unit.

Only one team did, however, manage the completion of the Belt Drive Unit the following day. It was FA.COM Robotics, a team from Japan affiliated with system integrator office FA.com Co.,Ltd.

Although their robot struggled with the belt attachment, it succeeded in assembling a product that met standards with seven minutes remaining in the sixty-minute task. The team earned top score on Day 4 with 51 points. The hand on their robot was also uniquely configured; a screw driver was set between the two fingers, allowing it to quickly turn screws once in position. The level of perfection put on display comes thanks in part to the fact that the team is made up of professional system integrators. 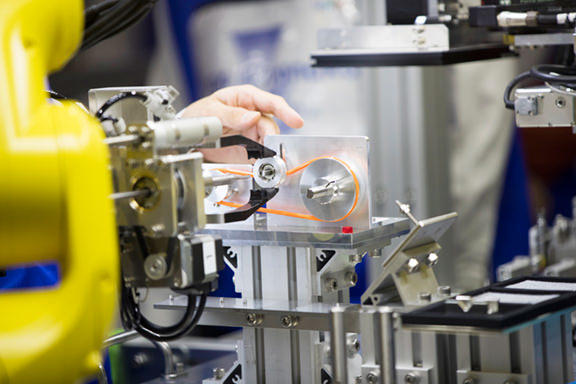 The moment FA.COM Robotics finished assembling the Belt Drive Unit, spectators in the vicinity watching the action cheered loudly. Even though the team ended up in third place overall due to their performance in Days 1 and 2, of all the teams in the competition, they were the ones that got the audiences the most excited. 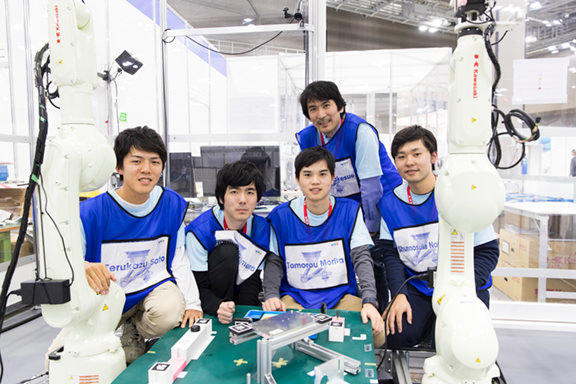 While many of the top positions were taken by teams from overseas or those associated with organizations, student-based teams stood their ground. One such team is hippopoTaMus, made up of four students of Tokyo Metropolitan University, whose laborious efforts resulted in a three-fingered hand attachment for their robotic arm. The use of three fingers meant that even if there was a slight deviation in position when objects were grasped, the objects would slide back and firmly seat itself in the center of hand, allowing it to endlessly rotate while keeping hold the object. Another arm the team had was outfitted with a two-fingered hand and that was used in combination with this arm for the assembly task.

The team performed admirably during the two sessions held for the task board task on the first day, scoring 42 points in the first session and 28 points in the second. The team mounted a camera next to the hand for parts recognition and members say that it worked out well without the need for teaching （the process of programming the robot).

They say that their strategy was to focus their resources on the task board task, and it worked out perfectly, giving the team a fifth-place finish at the end of Day 1. Despite being a team of university students with constraints on budget and time, they had a remarkable performance. 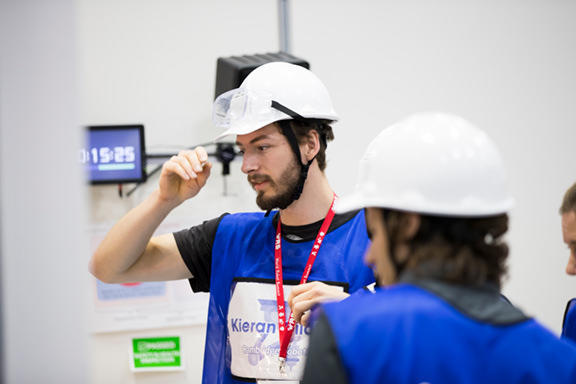 Another unusual and interesting sight came courtesy of Cambridge Robotics from the United Kingdom, where they used sticky grease to pick up screws. Having grease remain on screw holes would normally cause trouble in actual manufacturing situations, but in this Challenge, it was a non-issue according to the rules. For company-based teams that are used to real-world production and usually have no tolerance for defective products, this was a uniquely university-student idea and one they would have never come up with themselves. Cambridge Robotics was the only team that chose the most challenging surprise part, the chain, and although the team could not complete the assembly task, they thrilled audiences.

A Dancing, Life-Sized Humanoid Performing in the Booths

An exhibition, the World Robot Expo, was also organized to run alongside the competitions at WRS2018. At the Kawasaki booth, life-sized humanoid robots were exhibited.

Kawasaki has been engaging in the development of durable humanoid robots that will not break down when they fall, and Version 4, which was released last year, put on a show by dancing at the booth and gaining visitors’ attention. In addition to the demonstration, Version 5, the latest iteration of the robot, was put on display as well. Modifications to areas including axis configuration have successfully led to Version 5 becoming lighter and slimmer than its predecessors. 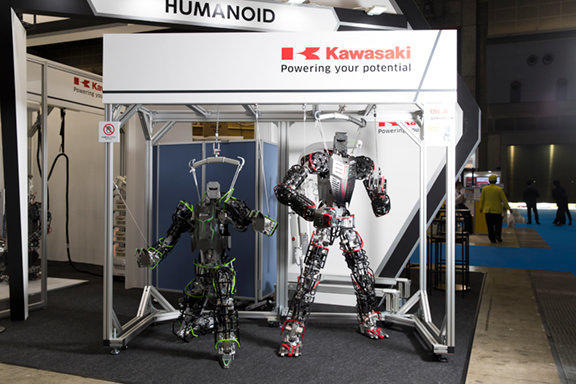 The latest incarnation, Version 5, stands on the right

The latest model of the Dual-Arm SCARA Robot, the “duAro2”, was also introduced at the Expo. The duAro is a cobot, or collaborative robot, designed to work next to humans. While keeping its characteristic compact body, advantageous in promoting widespread implementation, untouched, the vertical stroke for the duAro2’s arms has been significantly extended from 150mm to 550mm, and its maximum payload has also increased from 2kg to 3kg. These improvements broaden the field of application where duAro would be suitable. 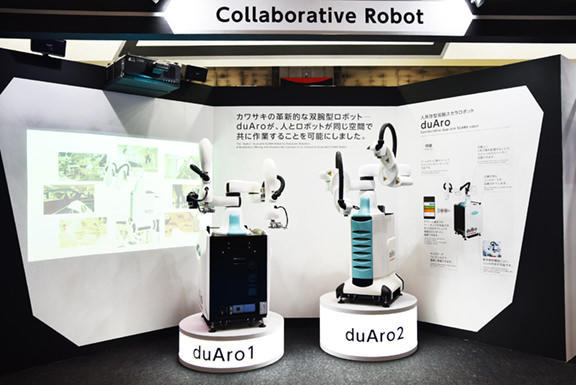 Further Evolution of Robots is on the Way toward WRS2020

Had they been given a month to work on the movements of their robots, perhaps many more of the teams would have completed the assembling of the Belt Drive Unit. However, in order for more robots to be out in the field, quick deployment and ease of use is critical. For this reason, tasks at the Assembly Challenge were set up to be extremely difficult, and obstacles such as the provision of surprise parts on the day of competition were included, because these situations reflect what goes on in real manufacturing sites where they have to constantly respond to various production changes.

The highlight of the Assembly Challenge is observing how each team handles highly complicated problems, some of which they may face when introducing robots into manufacturing sites for real. Knowing this might make viewing the upcoming WRS2020 competition even more exciting.

WRS2020 is scheduled to take place in early October 2020 at the Aichi International Exhibition Center （some competitions of the Disaster Robotics category will be held in mid-August 2020 at the Fukushima Robot Test Field). Many teams at these warm-ups might have struggled with their robots, but working towards further acceleration of the social implementation of robots, let’s wait and see what kind of evolution they show two years from now.