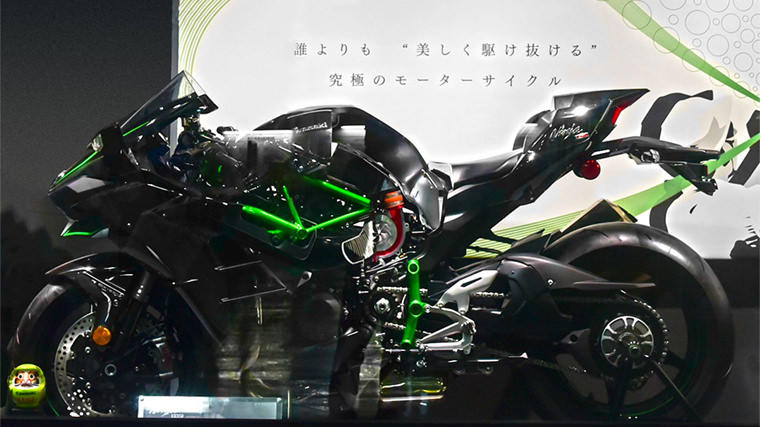 Kawasaki Heavy Industries, or Kawasaki, is well known for its“Kawasaki”motorcycle brand. As the “Heavy Industries” in its name suggests, Kawasaki is a manufacturer of a wide range of machines from motorcycles to ships to aircraft. However, did you know that one of the core products in its lineup is robots?

Kawasaki produces industrial robots that operate mainly in manufacturing sites, contributing FA. No, FA does not stand for Full Armor. It stands for Factory Automation. These robots, which Kawasaki was the first to domestically produce in Japan, are working hard in factories around the world today.

Needless to say, these robots are part of the workforce in Kawasaki’s motorcycle factory as well. How does a work environment where people and robots work together look like? We’re very curious to see human-robot collaboration in a factory. Kawasaki, let us in on the details!

People and robots work together at Kawasaki factories 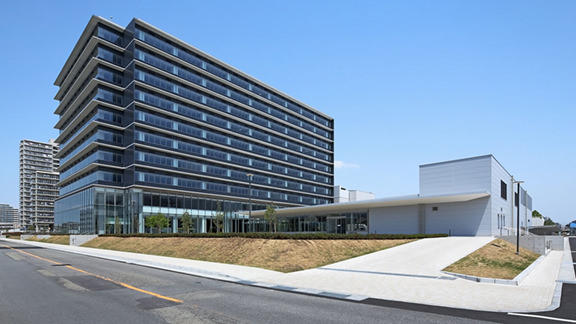 Our Gizmodo staff visited Kawasaki's Akashi Works in Hyogo prefecture where motorcycles, robots, jet engines, gas turbines and other machinery are manufactured and where Kawasaki’s robots are installed in various production lines. 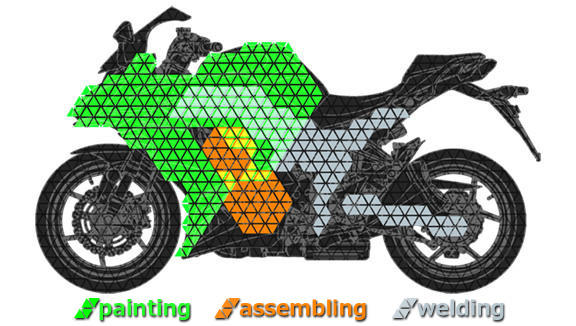 The Works manufacture state-of-the-art products, and it’s only natural that the production line at Kawasaki is highly automated. For motorcycle production, robots are implemented in the painting, welding and assembly processes. According to Kawasaki, there are lines where depending on the part, about 90% of the process is handled by robots, with humans just supervising!

Now let’s take a closer look at how people and robots work together in the factory. 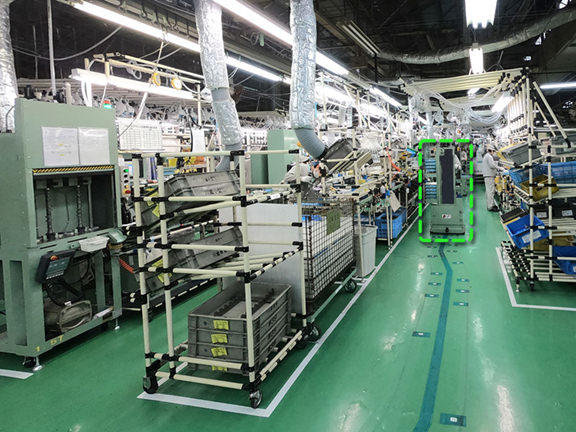 The cart moving along the blue line on the floor is an AGV (Automated Guided Vehicle).
Photo: Ryota Musha

First, we saw the assembly line for the engine, the heart of a motorcycle. An unmanned cart, known as an AGV (Automated Guided Vehicle) carries the engines while workers at each process put together parts.

There’s someone (or something) at the back on the right... 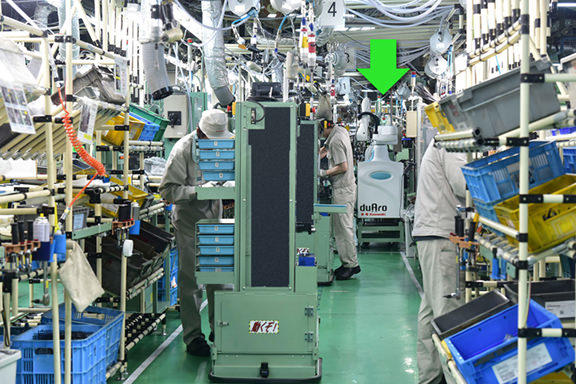 Hey, It’s duAro! duAro, who worked the other day as an apprentice at the Gizmodo editorial office, also works here.

His task at this factory is fastening screws. Once human workers attach a crankshaft to the engine block on the AGV, the AGV starts moving forward and stops in front of duAro. Once there, duAro tightens a number of screws. 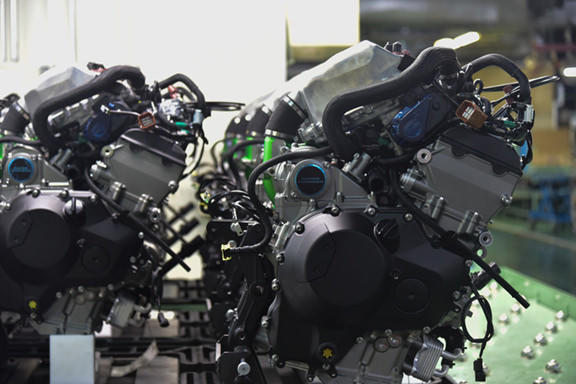 The workers of the motorcycle factory say that areas where duAro can be operated are still limited at the moment. duAro is not yet able to handle tasks where switching between several tools is required. Still, duAro and the AGV are like partners in crime.

Currently, duAro is used on a trial basis. As its capabilities expand, they at Akashi Works intend to assign it new tasks.

Need power? No problem! A pair of robots pressing bearing

There are also other robots hard at work at the engine factory.

The robot in the back changes tools that have bearings set in them. The robot in front carries engine parts.
Video: Ryota Musha

An engine is made of various parts. Bearings, which are used to reduce friction between moving parts, are one of them. They can’t be loose and rattling about, or they would be of no use. They have to be fitted properly by flipping the engine block around and then forcefully pressed in using a press-fitting machine. But an engine block is a solid mass of metal and extremely heavy, making the task very difficult to do for humans. Yes, this is an ideal task for robots.

This a human-robot-robot work sequence. Brilliant.

Next to see is the welding process for the swing-arm, which essentially functions as the motorcycle’s leg. Watch a duet between two robots, one holding the swing-arm while the other welds, as they handle a task in amazing harmony!

One robot picks up the Ninja H2’s swing-arm, with its graceful, almost organic-like three-dimensional curved surface, and the other performs the welding. The swing-arm is spun around and welded again! It is so cool.

I actually have some experience in the past with arc welding. It’s a tough job; just putting on the protective gear is cumbersome, and any shaking of the welding rod results in a messy weld. Add to this the fact that a motorcycle’s swing-arm is a three‐dimensional object and it is hard to imagine any human who can perform this feat of welding while constantly moving around. 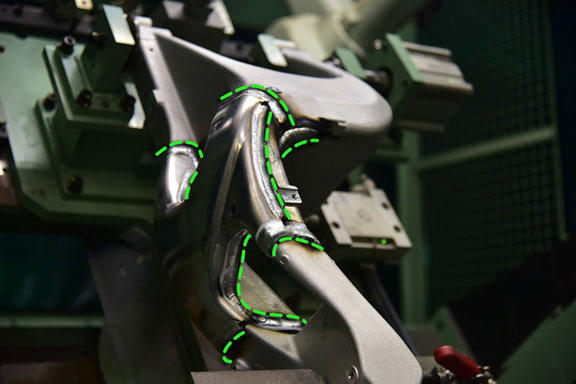 Take a close look at these beautiful welding beads. These are the mark of a master!

The techniques these robots display are actually taught by craftsmen. Since robots have joints with a greater range of motion than humans, they can perform maneuvers like welding without pausing, outclassing their master human instructors.

And the accuracy in which it performs is very high; the movements of the robots can be fine-tuned in tenths of a millimeter. Several robots can also be taught, each learning a different operation. Using robot simulation software, they can rhythmically master all movements. 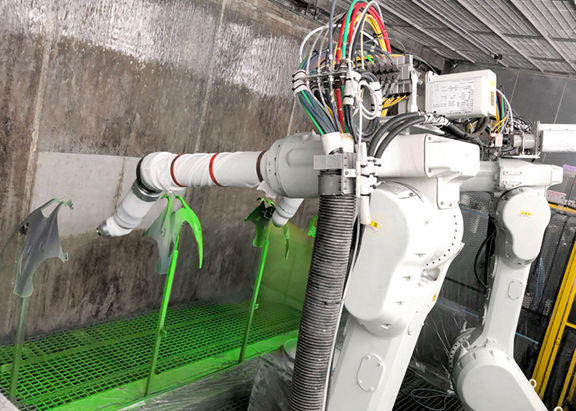 These robots adjust the movement of their arm or change the color for spraying to suit the part(s) moving along the conveyor belt. Water runs continuously on the opposite wall to collect excess paint.
Photo: Ryota Musha

The paint factory, which was our last stop, uses organic solvents and is one worksite where they leave as much of the work up to robots At the Akashi Works’ motorcycle painting factory, human workers focus on management of factory operations and product inspection, and the actual painting process is performed mainly by robots.

The robots check the RFID tag attached to the hanger and from that, they identify the type of part delivered and what the color of paint should be. Then, they spray-paint the part. The finish is the perfect shade of Kawasaki’s symbolic lime green!

Like with the welding, during the painting process, the advantage of using robots is the ease in which techniques can be conveyed. While there is a need to train and nurture workers individually, in the case of robots, if you teach one how to master an operation, another 10, or even 100 robots can easily be taught using the same process.

Robots these days can be taught by physically moving and manipulating their bodies (arms), so even pointers such as what angle the effector should be or how quickly it should move—things which are generally difficult to put into words—can be taught as well. 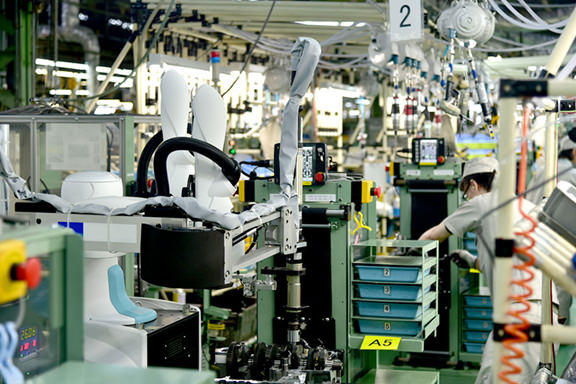 While Japanese society faces a severe demographic challenge with continually low birth rates and aging population, the number of manufacturing sites struggling to secure labor resources will probably continue to grow in the foreseeable future. Because of this, many people are working to answer a call to create innovative automation solutions in various fields.

The robots of Kawasaki are also supporting this innovation We were able to see the motorcycle production line at the Akashi Works in action this time, and they say that there are plans to increase the number of production processes to be handled by robots in the future.

More precisely, the key to determining if more processes can be shifted over to robots is whether or not the robots can reach a level where they can take over the task of directly attaching parts—a process currently performed by humans—such as attaching the cowl (fairing) or seat on a motorcycle. If a robot can be more dexterous with its effectors or becomes able to automatically swap attachments, its operational capability should be hugely improved.

If we will ask robots to do the tough, physical and routine work while we humans focus solely on processes requiring more intricate skills or supervising, there would probably be no need for overtime. Also, the amount of physical burden on us would further decrease, adding a little bit more of happiness to our lives. Visiting Kawasaki’s Akashi Works, I was able to realize this path.

People should be able to live valuable lives, and robots are there to help us do so. 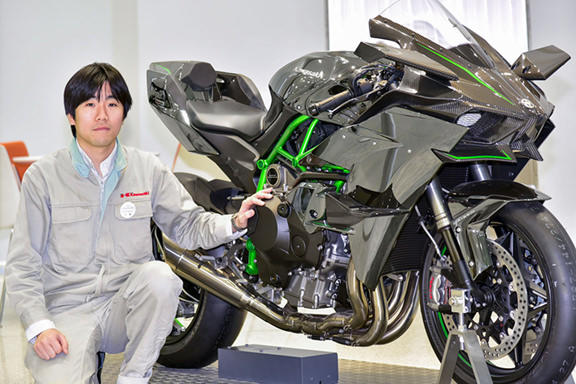 Read the original article on GIZMODO JAPAN 03.29.2018 * Available in Japanese.