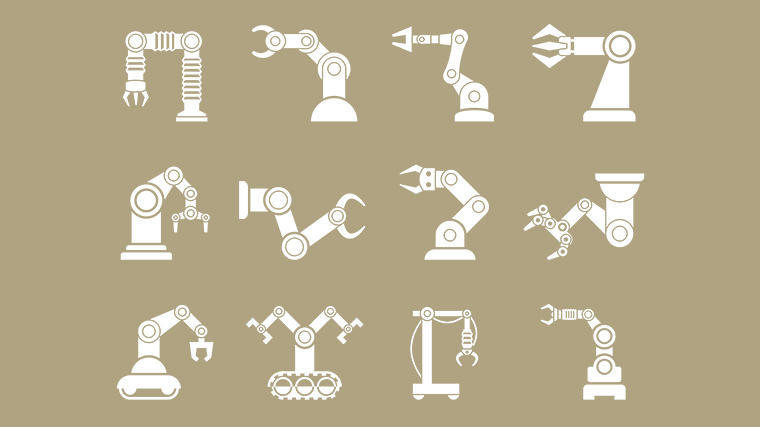 What Kinds of Industrial Robots Are There? A Guide on the Features of the Major 6 Types

Did you know that industrial robots were born in the U.S. and raised in Japan?

The first industrial robot in Japan was created over half a century ago. In 1968, Kawasaki Heavy Industries, or Kawasaki, signed a technical licensing agreement with an American venture company Unimation and began domestic production in Japan. Japan's first domestically manufactured industrial robot, the “Kawasaki-Unimate 2000”, was completed in 1969.

Since then, the development of industrial robots in Japan has accelerated, with the main focus on the automotive industry. Kawasaki has become one of the major industrial robot manufacturers, gaining a large global market share and establishing the foundation for Japan to become the present-day “Robot Kingdom”. It would not be wrong to say that industrial robots were born in the U.S. and raised in Japan.

Industrial robots are utilized not only in the automotive industry, but also in a variety of other fields such as the electrical & electronic industry and the food industry. They are used on-site for a wide array of purposes including welding, painting, assembling, material handling and palletizing, and in order to adapt to each operation, these robots come in many different types.

Although they are so widely utilized in various fields and they appear to be many kinds, did you know that industrial robots are actually roughly categorized into 6 major types? Let’s take a look at these types of industrial robots.

The difference is in the type of joint and mechanical structure 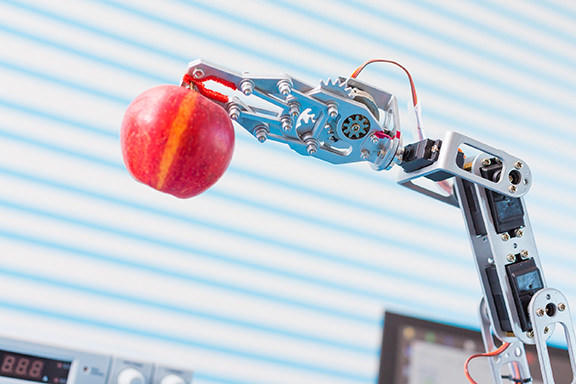 There are various ways to categorize industrial robots, for instance, by operation, industry or size. However, here we will focus on the type of joint and the mechanical structure of the robot.

There are many similarities between the “joints” of robots and humans, but there are also differences. Motors are often used in the joints of robots, but it is not only rotary joints moving like human wrists and elbows that are used for movements; linear joints that move extending forward, backward, upward and downward are used as well.

Axes are to robots as joints are to humans

Operation tools, known as end effectors like hands to grip objects, are attached to the end of robot arms. Robots move their end effectors to perform various kinds of work, but since our world exists in three dimensions, more than three joints are required to move the effector to any position in space. Furthermore, if the angle of the effector needs to be considered, then a minimum of six joints are required.

Depending on how multiple joints are positioned, robots can be categorized into the following 6 types: 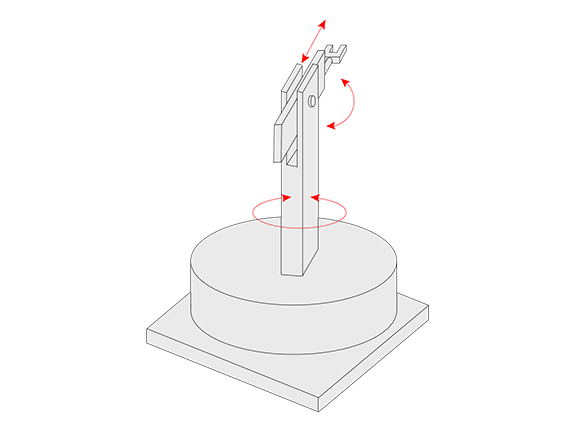 This is a robot that features a centrally pivoting shaft, like a revolving gun turret and an extendable rotating arm. With a hand designed to reach a wide surrounding area, this robot was extensively used in the early days of industrial robot development. The aforementioned Kawasaki-Unimate 2000 belongs to this category.

Below is a rare video showing a glimpse of Japan’s first domestically manufactured industrial robot, the Kawasaki-Unimate 2000, in action. （https://www.youtube.com/watch?v=ZGD7ibyWL18） 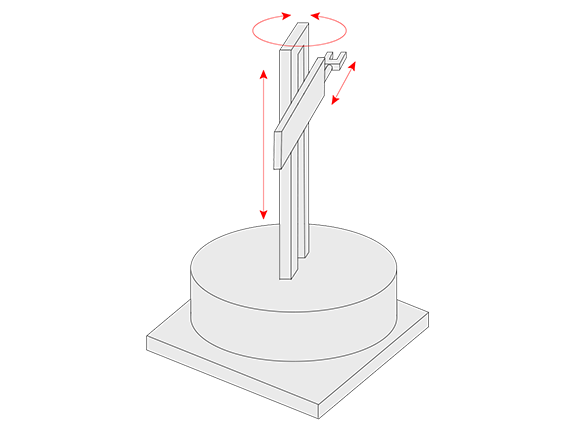 This robot is similar to the polar coordinate type for its pivoting shaft and extendable arm, but the difference is that the arm moves vertically by sliding, not by rotating. Its features are almost identical to its polar coordinate counterpart and it too was often found among early industrial robots. Today, this type of robots is still in use for the transport of items such as LCD panels. 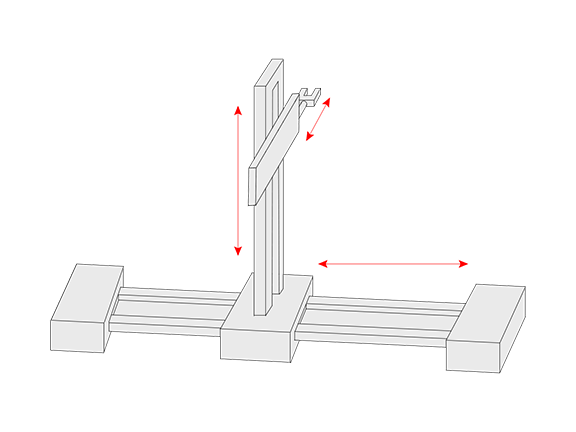 This is a robot that performs movements on three dimensions not by rotating but by sliding on its three perpendicular axes. If you imagine claw machines found at gaming arcades, it may paint a better picture of how it moves. The size of the area required for installation tends to be large because of the necessary operational area. However, it offers high accuracy and is very easy to use. It is often used to transport heavy items. 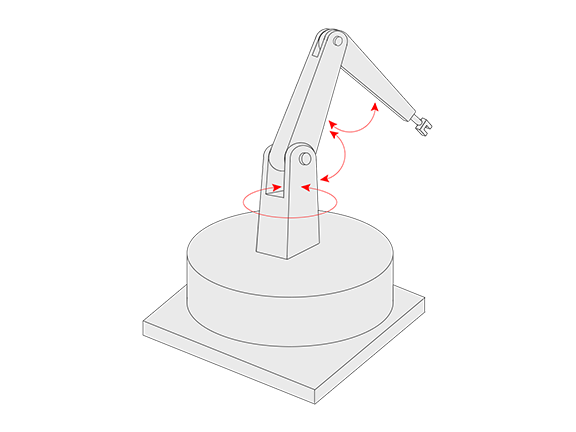 This is the most common type of industrial robots today. Articulated robots have a similar mechanical structure to that of a human arm. It features a high degree of freedom, but at the same time controlling the robot is rather complicated. This type of robots is used for various purposes such as welding for automobiles.

In this video, articulated robots are welding car bodies and motorcycle frames. （https://www.youtube.com/watch?v=c_kTwiUsyp4） 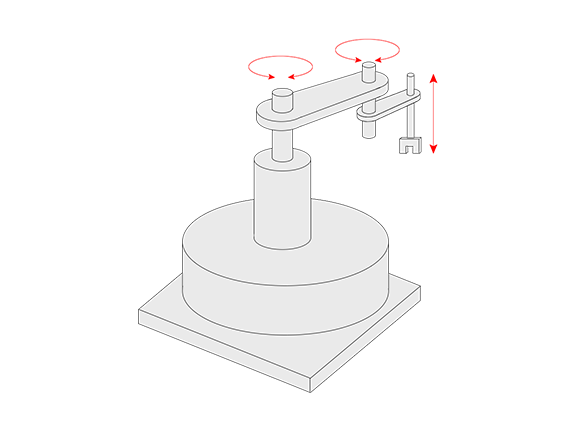 This is a robot specializing in lateral movements. As all the rotary shafts are vertically positioned, the end effector attached to the arm can move only horizontally. These robots work by moving the arm at high speed to a point on flat surface and then raising and lowering the effector, thus making them useful for operations on level surfaces. This kind of robots is widely used in many situations, for instance, in handling semiconductor wafers and assembling circuit boards.

Parallel link robot: When speed is the key 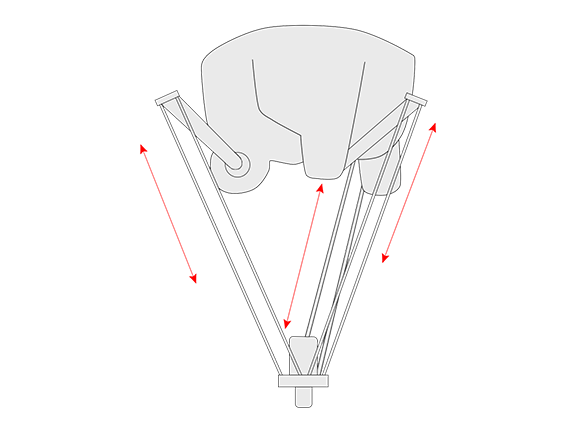 While the aforementioned articulated robot has serial joint linkages, the parallel link robot has parallel joint linkages. In general, these robots have three arms to control the positioning of the effector and they are usually used in situations such as sorting and selecting food products running along on conveyor belts. The work range is rather limited, but because each joint has direct control over the effector, the ability to achieve high-speed operation is its strength.

These are only a few examples of what industrial robots are capable of, but we hope that you got basic understanding of each robot’s specialized movements and kinds of work robots do depending on their type.

The key is to select an appropriate robot

Despite them all being classified as industrial robots, each robot is characteristically different from one another in aspects such as work range, precision and speed depending on the type of joint and the robot’s overall mechanical structure, and each has tasks particularly suited for. When implementing industrial robots to automate your business operations, understanding and selecting the appropriate type is a crucial step.