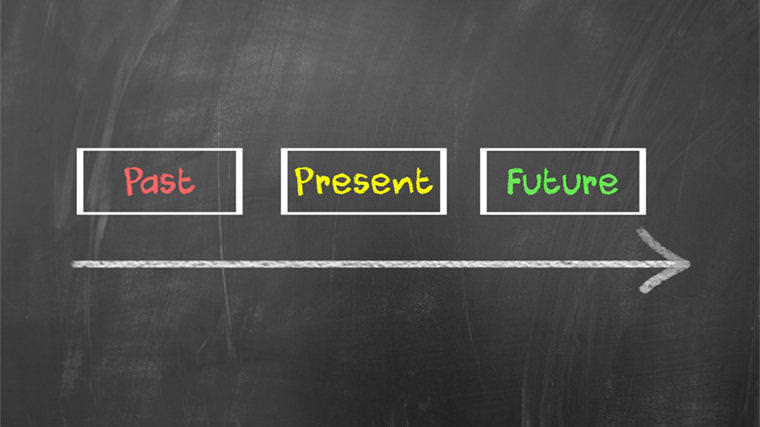 Looking into the Past, Present, and Future of Robots in the Context of Social Changes

The growing issue of workforce shortages

Currently, Japan is on the verge of becoming an aging society with a low birthrate, unlike any other in the world. The total population of Japan peaked in 2008, amounting to 128.08 million people, but has since been on the decline at a rate of approximately 100,000 people per year. According to the "Population Projections for Japan: 2016 to 2065" conducted by the National Institute of Population and Social Security Research in Japan (IPSS), the population is projected to fall below 100 million by the year 2053.

The results of these projections have led to concerns about the growing issue of workforce shortages. In 2015, the working age population of those aged 15 to 64 was 77.28 million; however, as stated in the aforementioned projections, the workforce is predicted to fall below 70 million in 2029 and continue its decline to less than 60 million in 2040 and 50 million in 2056.

The population aging rate (the proportion of the total population aged 65 and above) of Japan is at present the highest in the world and it is expected to increase further in the years to come. The ratio of people over 65 years of age was 1 in 4 people (26.6%) in 2015, but is expected to rise to 1 in 3 people (33.3%) by 2036. The strain on the working age population becomes greater day by day. 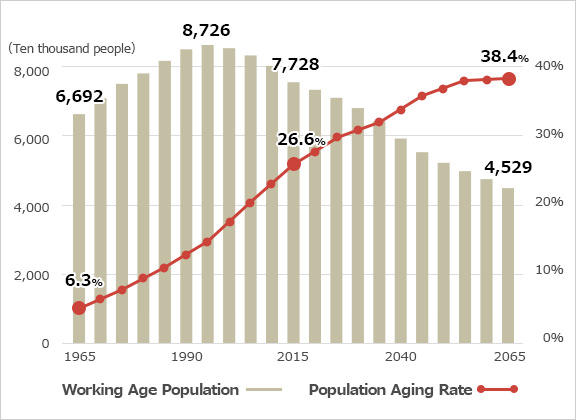 *Working Age: ages 15 - 64, Population Aging Rate: the proportion of the total population aged 65 and above
Source: National Institute of Population and Social Security Research website
Source: Population Estimates of Japan 1920 - 2000 from the Portal Site of Official Statistics of Japan (e-Stat)

How can we compensate for this shortage in the labor force? One of the highly expected countermeasures right now is the use of robots.

[Past] Industrial robots of the past and their challenges

Japan has long been recognized as the robotics powerhouse. One of the symbolic representations of this is the industrial robots that support Japan's manufacturing. Robotic automation enables the operation of production lines with less manpower; as such, industrial robots have become widely used in the automotive industry to complete various tasks like hauling, welding and painting, while at the same time liberating humans from working in harsh conditions.

Nevertheless, while industrial robots excel at simple tasks such as hauling and welding, they are not suited for replicating such tasks which require the craftsmanship and artistry of practiced engineers. The implementation of robots in the manufacturing business is still partial and many jobs remain dependent on the hands of workers.

The number of industrial robots installed per 10,000 employees
in the manufacturing industry 2016 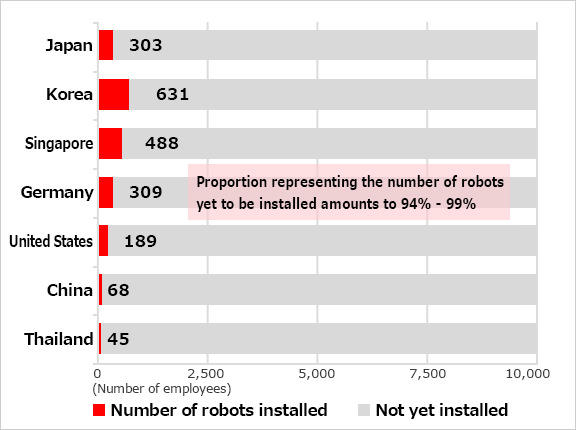 Another obstacle in robot installations was a lack of flexibility in production line with robots. In order to secure the safety of the workers, the robots were unable to work in the same area as humans and hence required their own designated spaces. Due to the strict operational restrictions, such as installing a safety fence between robots and humans, the construction of a more versatile production line posed a challenge.

There was also the issue in terms of usability. To operate industrial robots, they usually require a programming process which teaches the motion sequence to robots. This process requires an engineer with expert knowledge, and the programming itself is an excessive workload. Therefore, this teaching process is only worth its time and cost if the products are mass-produced and it is unsuitable for tasks involving products that change within a short span.

Due to these constraints, companies, especially those that are unable to secure sufficient workspace or those that manufacture multiple small lot productions, were forced to abandon the installation of robots against their wish.

The demand for industrial robots has been driven by the automotive industry as well as the electronic and electrical industries, but in recent years, robots have become widely used in other various industrial fields.

What encouraged the widespread of robotics was the easing of the regulation in 2013. Until then, it was required to enclose robots within a safety fence and install it in an isolated space. After the relaxation of regulations, it became possible for robots to work in the same space with humans without being separated by fences as long as the conditions met the given safety standards. Robot installations became less of a challenge even for companies that lacked the space necessary to install safety fences.

Dual-arm SCARA robot "duAro", from Kawasaki Heavy Industries, or Kawasaki, expanded the fields for human collaboration as a result of the aforementioned easing of the regulation. duAro can coexist with humans to execute tasks alongside people in the same amount of room required for a human workspace. This subsequently set the bar drastically lower for those who sought to install industrial robots. With the evolution of technology, robots are now also competent to perform assembly tasks which require human beings to utilize both hands. For example, a robot can hold a container with one arm to establish its position and fasten the lid to that container with the other arm. By adopting the latest technology such as image recognition, it allows the robot to accurately recognize, grasp and transport a given object to work even if that object is randomly positioned. 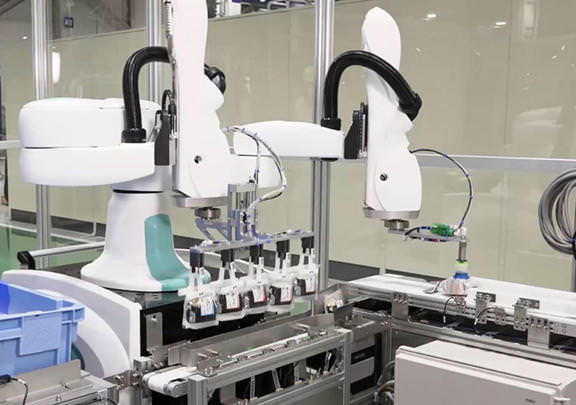 duAro accurately grabs the onigiri (rice ball) with one arm
and packs it into the food tray with the other arm.

With the development of industrial robots such as duAro, the automation of factories is accelerating even outside the automotive and electronic and electrical industries. The food, cosmetics and pharmaceutical industries are also looking into implementing more robots to their fields.

To strengthen international competitiveness, it is vital to further improve efficiency through automation; consequently, it is believed that robotic automation will undergo additional progress in manufacturing sites from now on. In 2017, Kawasaki announced the robot system, "Successor", which allows for the field workers without expertise in robots to teach the motion sequence to the robot through hands-on tasks in a similar method that an apprentice acquires a skill by observing the work of the master.

These new systems will resolve such issues as the complexity of the programming process in industrial robots, thereby making it possible for robots to be introduced into work areas yet to be automated. As more user-friendly robots emerge one after another, it is expected that robot installations will advance even with small-volume, multi-product manufacturing of small- and medium-sized enterprises that had been unable to utilize robots until now. 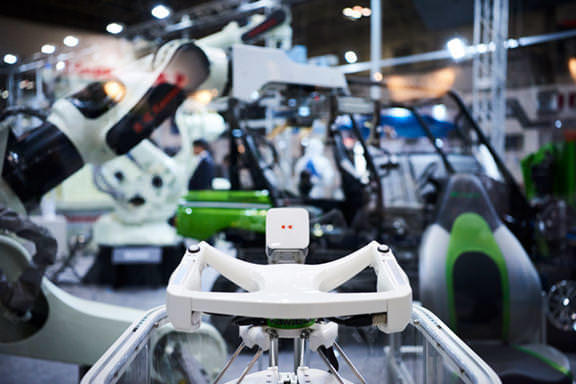 Successor exhibited at the iREX2017.

[Future] From the industrial field to our everyday lives

The active role of robotics is not just limited to the industries and it is currently in the process of expanding its boundaries. For example, SoftBank's communication robot, "Pepper" has been developed not only for domestic use but also for businesses and can be observed serving customers at electronics retail stores or in hotels as concierge.

Sony, one of the leading Japanese consumer electronics manufacturers, which had been selling the pet robot, "aibo", released the updated aibo in 2018, the first time in 12 years, attracting tremendous interest. Currently, various robots are being developed and produced not only by the major global companies like Sony, but also by the start-up ventures with new products and services emerging one after another.

In recent years, the appearances of robots have also been shifting. Unlike industrial robots, which were predominantly structured with a single arm, many newly developed robots are observed to resemble the shapes of animals and people.

When robots take on the shapes of animals or humans, they become that much familiar; as such, many of these robots are seen to put an emphasis on engaging in communication with people like Pepper and aibo. Be that as it may, a human-shaped robot is capable of becoming familiar to human beings, not only in the context of simply having the sense of affinity, but also in terms of increased practicality. For example, the environment in which we live today - the width of a passage, the steps of a staircase, the position of a doorknob, etc. - is created for the convenience of human beings based on our size and physical movement. If a robot is the same size and is able to move in the same way as humans, it will be capable of performing tasks within the living environments of people.

This idea ultimately leads to enable the robots to work on behalf of humans in dangerous environments. A concrete example would be the operations in disaster and accident sites. Many of the disaster relief robots researched so far have been crawlers (caterpillars), but if they are humanoid robots, they will be competent to perform tasks by adapting to the human living environment without the need of adjusting the surroundings for the robots. They can climb ladders in the same way as humans and enter the site of a fire. In addition, they will be able to fit into the fire-resistant gear designed for humans to strengthen its durability. These highly versatile qualities are greatly beneficial for disasters and emergencies. 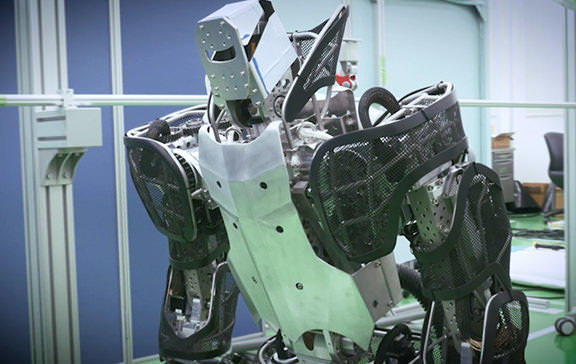 Humanoid robot developed jointly by Kawasaki Heavy Industries
and Professor Inaba of the University of Tokyo.

With the dramatic evolution of elemental technologies that constitute robots, such as image, speech, or space recognition, AI learning, sensors and actuators, preparations are underway for robots to be actively utilized in a broader field. In the future, a diversity of robots will make its appearance in various fields to compensate for the workforce shortage as well as to take over heavily strenuous tasks. Imagine a life becoming more convenient for human beings in the course of time.

Robots are becoming more familiar in our lives. Envision, for example, the new humanoid robot by Kawasaki becoming a common existence in households all over the world and assisting the humans in the various scenes in everyday life, such as cooking, laundry, and cleaning - a future like this may not be too far away.