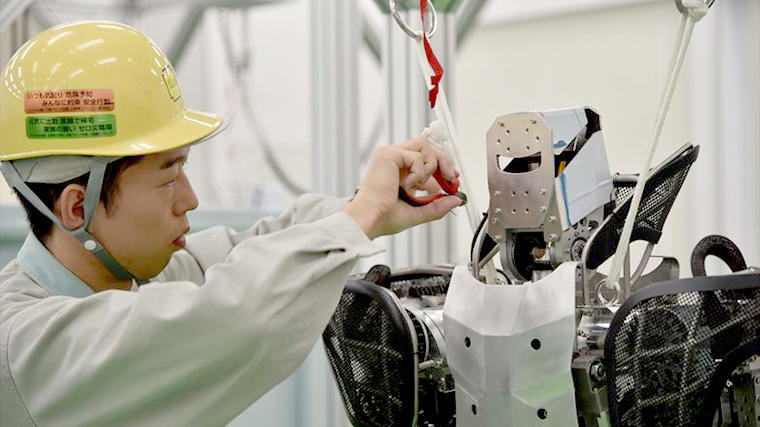 What lies ahead in the evolution of humanoid robots?

Humanoid robots are robots with a human form. Robots such as Astro Boy have been familiar from Japanese manga and anime worlds since long ago, but in the real world, little progress had been made in putting them into practical use due to difficulties with control and other issues. When he started running the story of Astro Boy in 1951, Osamu Tezuka set the birth of his creation Astro Boy as April 7, 2003. More than 10 years has already passed since that date, with no appearance of Astro Boy in the real world.

However, in recent years, with extraordinary progress being made in a variety of peripheral technologies, such as artificial intelligence (AI); image and voice recognition software; CPUs; and different types of hardware devices including sensors and actuators, significant changes have been taking place. With a global robot trend underway, several different hit products have made their ways onto the scene such as SoftBank’s robot “Pepper” and “Robi” from DeAGOSTINI.

How will humanoid robots continue to evolve in the coming years? Will it become real that a powerful robot like Astro Boy helps people? I sat down and spoke with two of the key persons involved in the development of new models of humanoid robots from Kawasaki Heavy Industries, or Kawasaki, to learn more.

The first person I spoke with was Professor Masayuki Inaba from the Jouhou System Kougaku (JSK) Laboratory at the University of Tokyo. Professor Inaba, the leading authority of robot research in Japan, oversees the software development for the new-model humanoid robots. 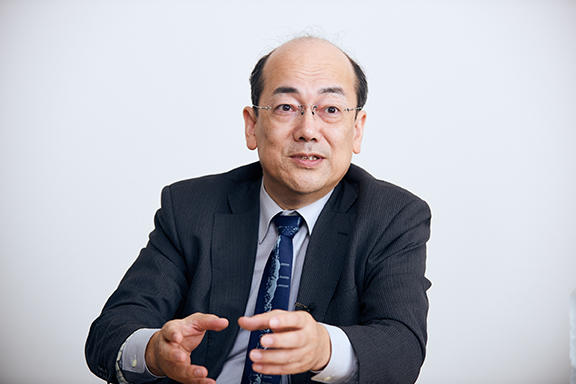 ――How was the research on humanoid robots started?

Masayuki Inaba:I worked on the research on robot arms at first, and then one day, I happened to purchase a robot toy for my children. Its shape was a bullet train and it transforms into a humanoid robot. At the time, I felt that if, by the time those children, so fascinated, playing with that toy so obsessively, grew up and were set to head off to college and humanoid robots had not become a reality, then they would not become interested in engaging in robot research themselves. I believe that university research needs to change so students can engage in something new. I dwelt on these thoughts for about two years until I came across parts for toy radio-controlled cars. I realized that you could easily make a small humanoid robot just by putting together twenty or thirty different servo motors from these cars. Although the robot was too small to equip a computer inside, I could still control it wirelessly. I completed that robot sometime in the early 1990s.

――I see. You started with a tiny robot then.

Inaba: There are advantages of having it small. After all, it will not break even if it falls. Being biped, it will fall over more easily under any circumstances. Research in how to keep it from falling over is important, but if we design it so it can get up again even if it does fall, then there is no problem. Robots don’t usually break if they are small, so I was able to conduct experiments without worrying about breakdown.

However, there are problems that emerged as robots got bigger. A number of humanoid robots were entered into the 2015 DARPA Robotics Challenge (DRC), a competition held in the U.S., but they were broken in some way when they fell over, and as a result, they were not able to continue the competition. The bigger the robot, the easier it is to break.

Because we cannot complete our research if the robot breaks down every time we conduct an experiment, we currently have a rope that hangs the robot from the ceiling to keep it from falling over, but this situation creates a lot of restrictions on our experiment. Researchers all have an earnest wish to get a robot that will not break even if it does topple over. I had thought long and hard about how I could deal with this issue and, at just the right time, I was able to get assistance from Kawasaki when I needed it. 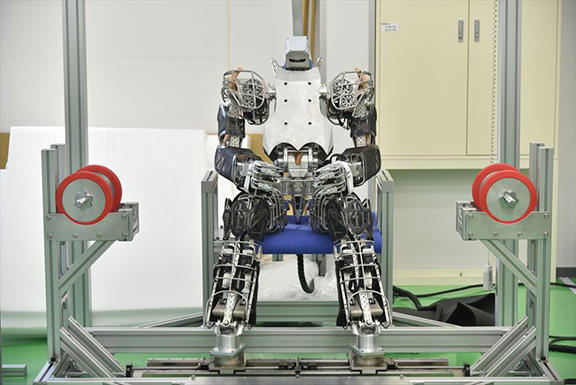 ――What is your expectations on Kawasaki?

Inaba: I hope that they can utilize the great technological strength that they have as a manufacturer and produce a life-sized humanoid robot that does not break. Over the last ten years, I had to be very careful not to break the robots when conducting experiments, but if we could develop hardware that does not break, we would be able to more freely conduct a greater variety of experiments like I first did with the smaller robot.

Also, sending humanoid robots out to the world as “products” is something that can only be handled by a commercial company. Just like a computer, robots can perform various things based on the range of the programs. I believe that it is important to come up with solid hardware and provide it to numerous researchers who experiment it and develop the programs.

A mission to expand the possibilities of robots

The person driving research and development of new-model humanoid robots at Kawasaki is Mr. Yasuhiko Hashimoto, the General Manager of the Robot Division. While there was some distance between academia and industry despite working toward the same goal, the catalyst behind starting cooperative development was apparently the common desire on each side to utilize their respective fields of strength to assist society in order to also expand the possibilities of robots. 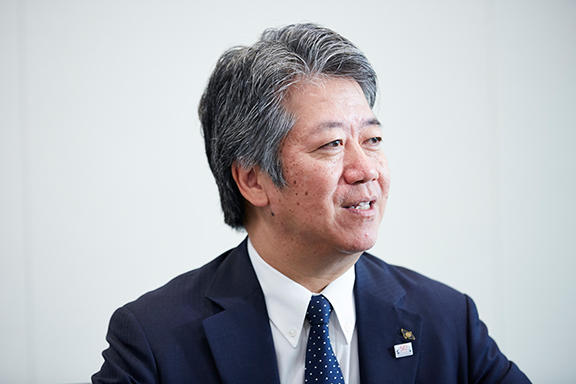 Yasuhiko Hashimoto:Kawasaki’s industrial robots are robust in that they do not break even if they bump into something. When I heard Professor Inaba talk about how frustrated he was about his robots breaking whenever he tried conducting an experiment, I felt that perhaps our industrial knowledge could come in handy in academic research.

Next year, it is going to be exactly fifty years since Kawasaki first became engaged in robot manufacturing. We of course intend to continue working in the field of industrial robots as we have established the foundation all this time, but as a leading expert worked to expand the use of robots throughout the world, I feel that further expanding the possibilities of robots is a societal duty that has been placed on us. In particular, we are focusing on the use of robots in times of natural disaster.

Kawasaki is a manufacturer of industrial robots with a proven track record. We are going to offer humanoid robots as products with a guarantee of quality just as we do with our industrial robots. We even have a customer support department that is ready and able to go out for repairs on a single phone call so customers can use our robots without worry.

The industrial robots that we make are designed to continue working 24 hours a day, 365 days a year. We hope to design humanoid robots that will be just as tough. It might be difficult to achieve this goal at first, but the fact that an industrial robot manufacturer is undertaking this project serves as a message showing our commitment to this goal.

You cannot talk about running a marathon convincingly unless you have run a full marathon yourself, after all. This current development of humanoid robots is a difficult path even for us to pursue, but we feel that it is our duty to put all efforts into completing this goal all the way to the end. 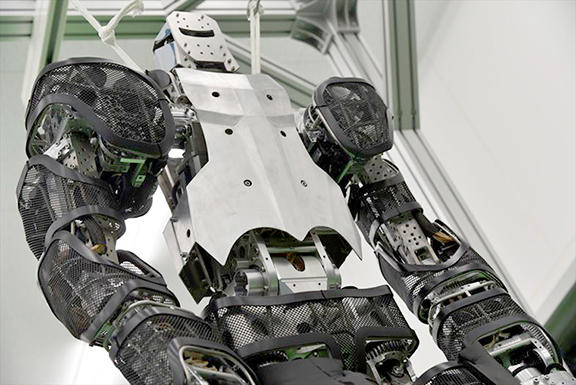 ――How did you succeed in making your robots more robust?

Hashimoto: We essentially take the same approach as for our industrial robots whether it’s maintaining the reliability for every single part we use, designing for durability, seeing how force is relieved when the robot is exposed to impacts, or calculating the safety factor. These distinct types of knowhow are all utilized in our new-model humanoid robots.

With industrial robots, we run grueling impact tests on them and continue working them until they actually break. If we can figure out the circumstances under which they break, we can link that to further improvements. These kinds of tests would probably be difficult for university researchers to complete due to the budget requirements involved.

However, as with people, who sometimes break bones when they fall, it would be difficult to prevent damage to humanoid robots 100% of the time. Therefore, we create designs that can be repaired easily even should they break, to protect against major threats to performance.

We currently employ electric actuators but are considering using hydraulic-based ones in the future. If we can use hydraulic actuators instead, the robots would become even more impervious to breakdowns. 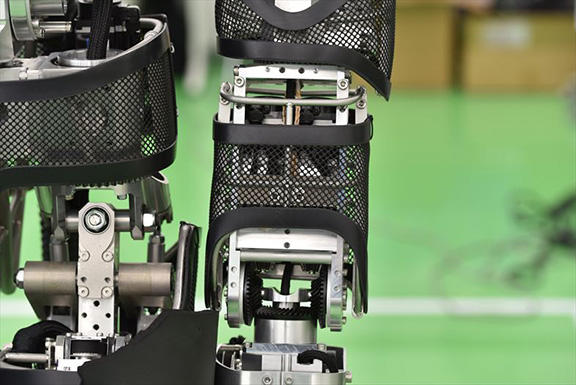 ――What are the advantages of humanoid robots?

Out in the real world, many different things are made tailored for use by people. It is difficult for a wheeled robot to move up and down stairs, but a two-legged humanoid robot can navigate them easily. Humanoid robots can probably use regular human tools without needing any adjustments to be made, as well. In the future, humanoid robots should be able to go anywhere humans can go and perform any operation that humans perform.

On top of that, humanoid robots are even tougher than humans. They can be sent to work in harsh environments that are too dangerous for humans such as radioactive or high-temperature environments. And because they are life-sized, sending them into sites of natural disasters wearing flame-proof gear made for humans is another possibility that can be considered. This is one advantage found with life-sized humanoid robots. 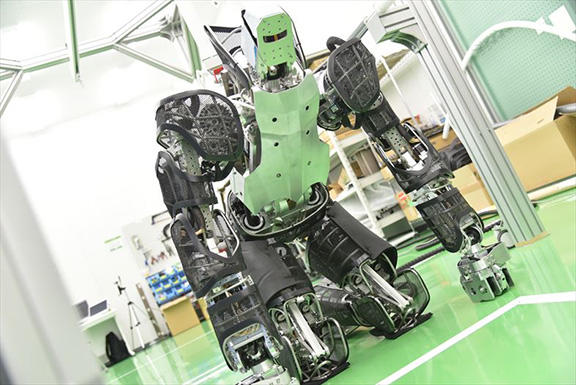 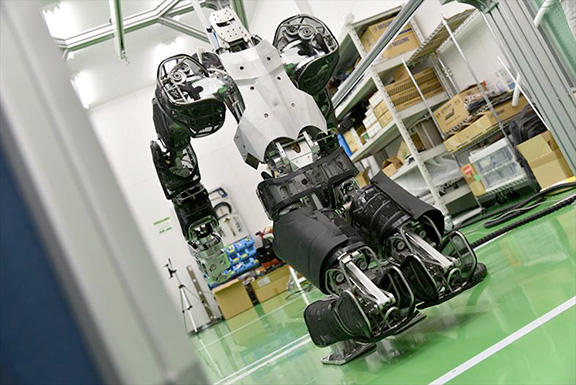 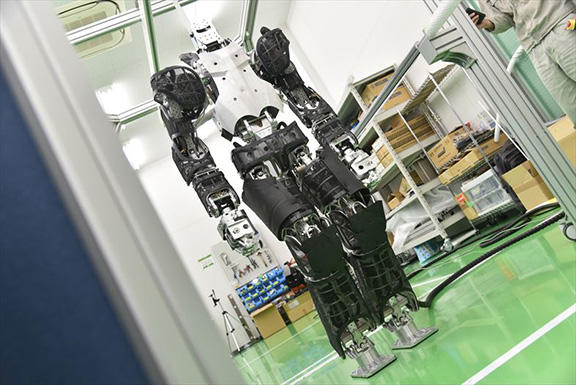 Humanoid robot getting back up after falling over

Making reliable robots that can be used in the household

――In what ways do you feel society will change with robots in the future?

We believe that supporting the aging society is a grand mission for robots to perform. The size of the labor force is decreasing year by year, and if things progress as they are, the people in the labor force will gradually become unable to support the elderly. Robots are needed to supplement this labor shortage. There is already a great need for robots and other support to assist with nursing care.

In order for robots to be used in the household in the future, they will need to have the same levels of softness and flexibility that human beings have. It would be frightening to have a large, hard robot sitting next to you, wouldn’t it? The number of industrial robots in factories that work in collaboration with humans has been increasing, but they are still quite sturdy. We need to study deeper on humans and evolve our robots even further.

We are an industrial robot manufacturer, but we want to make robots that can be used in everyone’s households someday. We can utilize our knowledge as an industrial robot manufacturer to offer reliability, robustness, and cost benefit to assist with making household robots more widespread. We believe that the days when robots will be common at home are certainly coming, and we are enthusiastically working to make those days come.

Evolution of robots linked to a new future

The new-model humanoid robots created at Kawasaki are provided as an open platform. By having many researchers use this platform as a base and pushing forward with various efforts, research and development of humanoid robots will be accelerated with greater speed than ever before. It is something everyone should pay attention to what kind of results this new collaboration between industry and academia will create and how it contributes to society in the future.