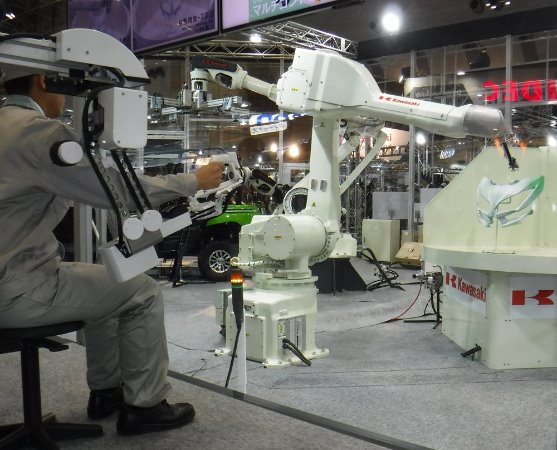 Kawasaki Heavy Industries, Ltd. announced the launch of "Successor", a new robot system that reproduces the movements of expert engineers through remote collaboration. Kawasaki will first introduce the system into the robot manufacturing line at our Nishi-Kobe Works and begin limited sales to some of our customers in FY2018, and will begin general sales in FY2019.

"Successor" is a system that has newly-developed remote control devices that enable remote collaboration. Remote control will make it possible to apply robots to a wide range of fields, and the system is compatible with a wide range of Kawasaki robots. The system can take movements operated by expert engineers by means of remote devices and convert them into automated operations by a robot. Also, through the robot's learning repeatedly operated moves by using AI technology, the robot will reproduce delicate movements by expert engineers that require fine adjustment. As a result, it opens the possibility of applying robots into fields such as those below, in which robotization has been difficult thus far:

1. Fields in which dispersion of accuracy in products is large and human skills are required, such as processes that require human senses like assembly and outfitting of products, and also casting and pressed parts

2. Fields in which many sensors must be used or whole lines and plants must be modified in order to achieve automation without human intervention, or where programming will take too much time and not make up for the cost and time

3. Fields pertaining to non-mass-produced products, such as made-to-order products and individual parts, in which product shapes differ slightly and product models are changed frequently

Furthermore, the system can take movements that expert workers have gotten the robot to learn, and pass them on to newcomers as skills, through a feedback system that can reproduce tactile sensations, force sensations, visual sensations, auditory sensations, etc.
Kawasaki is creating the future of a new industry that will make effective use of robots, using technological capabilities that we have cultivated over a period of 50 years, starting from when we began manufacturing Japan's first industrial robots and continuing up to the present day.
[Main functions of "Successor"]
The system achieves the following by using new remote control devices (called “Communicator”) that enable remote collaboration:
・Hybrid function between automatic/remote operations
Automated operations by a robot and remote operations by a human can be freely combined, so robotization will be possible in manufacturing lines where expert engineers had been required and introduction of robots had been difficult.
・Multi-control function
One worker can remotely operate multiple robots using one Communicator.
・Conversion function
The robot can learn, as is, movements that have been performed by humans through remote operations, and convert them into automated operations.
・AI function
Using AI technology, the robot can even learn work with dispersion that has been performed by humans through remote operations, and convert it into automated operations.
・Training function
By getting robots to learn work performed by expert engineers, skills can be passed on to successors through the robots.
Appendix: Presentation material of "Successor" - Please refer to the details in this document.